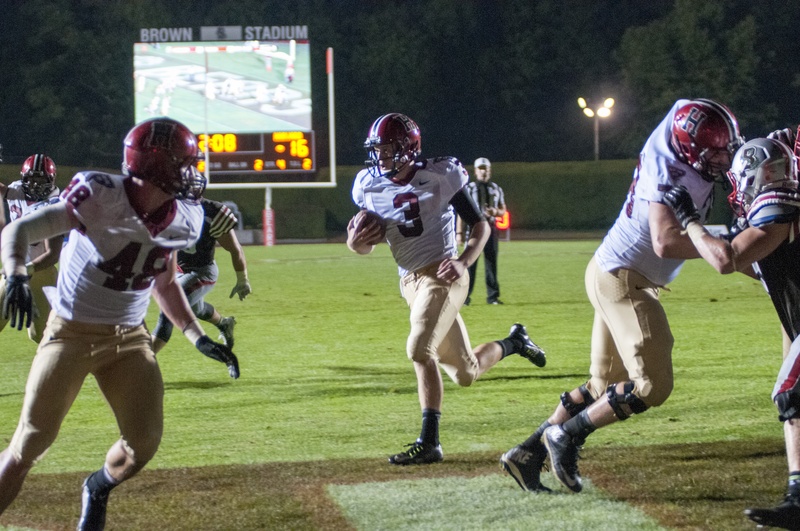 Junior quarterback Scott Hosch scampers across the goal line to give the Crimson a 22-14 lead with two minutes left in the game.

PROVIDENCE, R.I.—Starting your first Ivy League game is not an easy task.

Both Harvard’s and Brown’s signal callers experienced that firsthand, as the two teams opened their Ancient Eight seasons Friday night at Brown Stadium.

After the Crimson (2-0, 1-0 Ivy) fell behind by eight early in the second half, junior quarterback Scott Hosch, filling in for injured starter Conner Hempel, led the squad to a comeback victory over the Bears (0-2, 0-1 Ivy), 22-14.

“It seemed like it was uphill both ways the entire game,” Harvard coach Tim Murphy said. “I’m really proud of our kids. They hung in there, they battled, and that’s all we talk about.”

Clinging to a two-point lead, 16-14, with 4:33 remaining in the game, the Crimson faced a third and 12 at its own 25-yard line. Hosch threw a 10-yard dart to junior wideout Andrew Fischer, two yards short of the first-down marker.

But on the tackle, Brown linebacker Michael Walsh crashed into Fischer and was whistled for a helmet-to-helmet personal foul. The call resulted in his ejection from the game and a fresh set of downs at midfield for Harvard.

Hosch connected with Fischer on back-to-back screens to move the squad down the field before running it in for the score himself. A missed extra point—Harvard’s second failed attempt of the night—gave Brown a glimmer of hope, as the blunder kept the game within one possession with two minutes left.

Brown quarterback Marcus Fuller, starting his second game and first Ivy contest, showed his inexperience on the ensuing drive, firing the ball directly into the hands of cornerback Chris Evans to effectively end the contest.

Hosch, who played a portion of last week’s contest against Holy Cross when Hempel left with a back injury, led just four drives against the Crusaders, as Hempel returned early in the second half. Tonight, with no signs of Hempel coming in, it was all Hosch as signal caller.

“I had no doubt in our offense,” Hosch said. “I know that if we execute we will move the ball down the field.”

The junior, who ended the night with 234 passing yards, recorded the first passing touchdown in his collegiate career early in the first quarter. Hosch lofted the ball into the end zone, where Fischer made a leaping catch to put the Crimson on the board first. A botched snap on the extra point denied Harvard a seven-point lead.

Fischer was Hosch’s favorite target of the day, as the quarterback connected with Fischer 12 times for 115 yards. Hosch’s first start was aided by the return of junior running back Paul Stanton, who was out against Holy Cross. Stanton totaled 123 yards on the ground, including a 43-yard scamper to bring the Crimson within one, 14-13. Harvard elected to kick an extra point rather than attempt to tie the game with a two-point conversion.

“It was just a great run by [Stanton], such a great athlete,” Fischer said. “It’s such a big thing when you have individuals on your offense that can go out and give you a big momentum boost, and that just really helped.”

Throughout most of the game, Fuller took advantage of a young Crimson secondary that has given up mid-range passes to defend the big plays. With less than three minutes left until halftime, Fuller targeted a wide-open Reiley Higgins, who rolled into the end zone to give the Bears the 7-6 advantage heading into intermission.

Pinned down at its own 5-yard line on its first drive of the second half, Brown moved the chains with help from the Harvard defense, which committed three penalties to move the Bears 35 yards down the field. A roughing-the-passer penalty on senior defensive tackle Obum Obukwelu put the Bears in the red zone, and a few runs by Andrew Coke later, the home team extended its lead to eight.

In last week’s matchup against Holy Cross, defensive end Zack Hodges became tied for most career sacks at Harvard, but Hodges and company were largely unable to get much pressure on Fuller until the end of the game. Fuller ended the night with 238 yards, one touchdown, and one pick.

“Hodges didn’t get a sack this week, and I think he got four last week,” Brown coach Phil Estes said. “Our offensive line grew up a lot [this week].”

Upon Further Review: How Holy Cross Was Beat