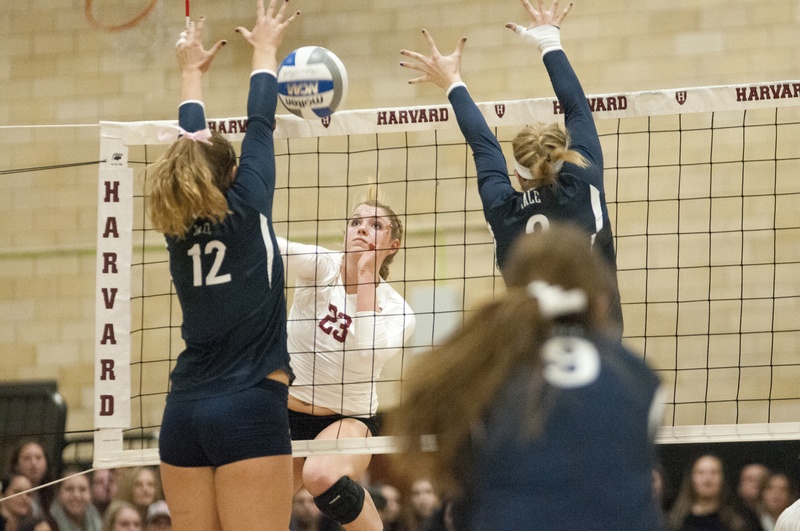 They did it once. They did it twice. But ultimately, three times was just too much.

After taking down Yale both on the road and at home this season, the Harvard women’s volleyball team came up empty in the Ivy League championship tiebreaker, falling to Yale in straight sets at the Malkin Athletic Center, 3-0.

“I think all of us left a little frustrated just because the games were all so close and we had beat them two times previously this season,” said junior middle blocker Caroline Holte. “So we knew we were capable of beating them.”

Despite the fact that the game was decided in straight sets, Harvard (19-5, 12-3 Ivy) proved to be a nuisance for the Bulldogs (17-7, 13-2 Ivy) the entire night. With Harvard needing to win the last three sets to win the game and clinch a berth in the NCAA tournament, the squad battled Yale toe-to-toe through the first half of the set. Standing at a 17-17 tie, the teams had been even at 12 points in the set thus far. No team had held larger than a three-point lead.

But the Bulldogs would rally off four straight points to gain a commanding lead. The Crimson responded with two of its own, but Yale quickly answered with three kills to force a game point. Two kills from junior outside hitter Kathleen Wallace fended off two game points, but a kill from Bulldog Kelly Johnson ended Harvard’s hope of playing for an NCAA championship.

The other sets were also highlighted by close play and late Yale surges.  After falling behind, 4-0, in the first set of the game, the Crimson got back into the game by taking five of the next seven points to secure a 10-5 lead. The Crimson would rally to tie the set at 18 points apiece, but Harvard never was able to take the lead. Yale proceeded to outscore the Crimson 7-3 in the last 10 points to take a 1-0 lead into the second set.

The Bulldogs got off to another 10-5 start in the second set, but the Crimson won 13 of the next 18 points to take an 18-15 lead. But behind two kills from Kelly Johnson of Yale, the Bulldogs strung together five straight points to regain momentum. The teams traded the next eight points to give Yale the chance to win a set point. With no room for error for Harvard, Yale senior Mollie Rogers recorded a kill to give the Bulldogs the second set.

Rogers led the game with 19 kills on the night. Kelly Johnson and Maya Midzik of Yale recorded 13 and 12, respectively. The highest Crimson output was sophomore setter Corinne Bain with 10. Wallace and sophomore Grace Weghorst followed her with eight of their own.

The team’s .173 kill percentage was the second lowest in the season only to .172 total that the team put up in the first conference game against Dartmouth.

Right from the start, this game had the atmosphere of a championship game. Students, parents, and alumni from both schools filed in in groves to root their respective teams to victory before the 131st rendition of The Game.

“Naturally, [the crowd] was bound to be a distraction,” Holte said. “There were just a lot of things happening that don’t happen in one of our typical matches. It took a little while for us to get back in the game internally."

The loss snaps the eleven-game winning streak that Harvard brought into the contest. During the streak, the team averaged less than one set per loss.

But even with the defeat, the Crimson still takes home a share of the Ivy League title, a claim that Harvard has not been able to make since 2004.

“It’s the best accomplishment our team could have achieved,” Holte said. “Our goal from day one was to win the Ivy League and that was what we accomplished. It just could not feel better to have everything pay off.”