"Prisoners" Fails to Break Out 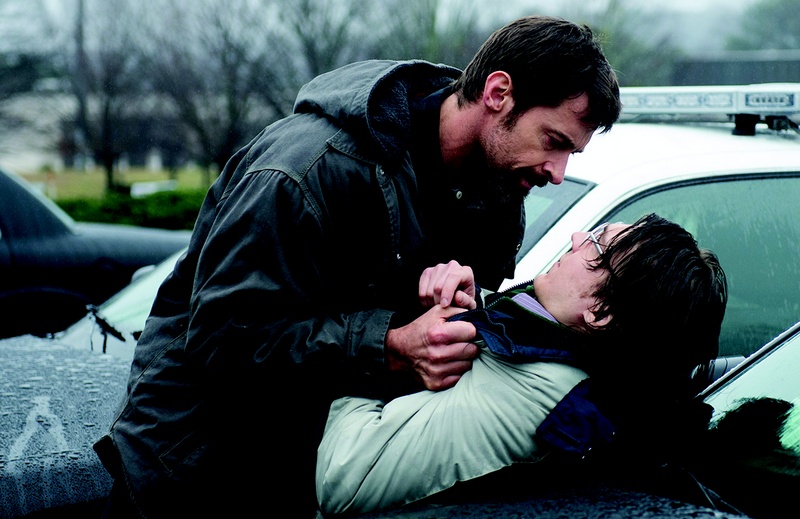 The inevitable joke to be made about Canadian director Denis Villeneuve’s new film “Prisoners” is that there is certainly an exceptional movie locked up somewhere within the two-and-a-half-hour production, but unfortunately, it remains a captive. The movie, which centers on the stock plot of a missing daughter and her vengeful father, Keller Dover (played mercilessly well by Hugh Jackman), begins as a taut thriller that is brutally effective in its ability to inspire terror. However, the final hour tests its own plot more than its audience, attempting to squeeze back into the obvious, platitudinous storyline that it so successfully avoided in the first two acts.

The setting is suburban Pennsylvania, which has never looked more sinister as frost settles on the woods that seem to encroach on the clapboard houses. It seems always on the verge of becoming a true wilderness, a sense that is sharpened by the subtle insinuations that the town has slumped into economic despair. This feeling of bleak survivalism finds its human counterpart in Dover, a man whose apocalypse-ready attitude is revealed in his introductory words to his son: a warning to be ever-prepared to act in any potential disaster. This is the instruction that he himself will follow to the gory letter as the film progresses.

Dover’s young daughter Anna and her friend Joy are abducted on a rainy Thanksgiving afternoon. The immediate suspect in the girls’ disappearance is Alex Jones (played by a perfectly cast, just-creepy-enough Paul Dano), a glassy-eyed and disturbed young man who offers up meek, quavering whispers in response to the questioning of the dogged Detective Loki (Jake Gyllenhaal). Jones, not having been charged with any crime, is released from custody, and Dover descends on him almost immediately, planning to torture him into revealing the location of the missing girls. The best parts of the film center on this triangle of men—Dover, Loki, and Jones—as the clock continues to run on the girls’ disappearance (Dover obsessively mentions each passing day, becoming more haggard and rabid as he does so).

While none of the men are especially unique characters, their competing motives snarl into a tense and truly frightening storm of power and violence.  Dover is a heavy-bearded, ruthless man who, once having introduced his view of the world, completely refuses to adapt. The extent of characterization for Loki seems to have been slapping a compass tattoo on his neck and a few self-done pieces on his hands, although Gyllenhaal adds in the compelling physical tic of blinking hard in moments of stress, while Alex’s cracked, high pitched voice and awkward, wide-framed glasses do a fair amount of work for the wildly-skilled Paul Dano. It’s no secret that the film is dealing in types when it comes to these men—they feel like familiar mechanisms more than intriguing characters, but this utilitarian approach to characters is not an amateurish mistake. The strength of the piece is the way these types interact—how extreme men respond in extreme conditions—and to its credit, the film is unflinching, even as it discovers the gruesome reality of what a man like Dover can do to a man like Jones.

However, the film breaks off from this devastating study in the last hour and falls into a steep decline. Suddenly, a movie that has been sleek, bloody and—most importantly—surprising begins to feel like an extended episode of Law & Order, cashing in on tricky plot twists and unexpected motives to become ironically mundane. Aaron Guzikowski, the screenwriter, seems to have made a complete about-face by the end of the film. He goes from challenging and leading his audience confidently in the direction of their yet-unrealized nightmares, to playing to their expectations and offering up a storyline that pretends to be complex while pandering to the amateur crime-solvers in the theater.

Villeneuve spends the first two thirds of this film building what could have been a truly special example of a tense thriller, but he throws this momentum away in the final act in favor of a more predictable finish. All this is not to say that “Prisoners” isn’t worth your time—it certainly is, but just an hour and half of it.

—Staff writer Sorrel L. Nielsen can be reached at sorrel.nielsen@thecrimson.com.