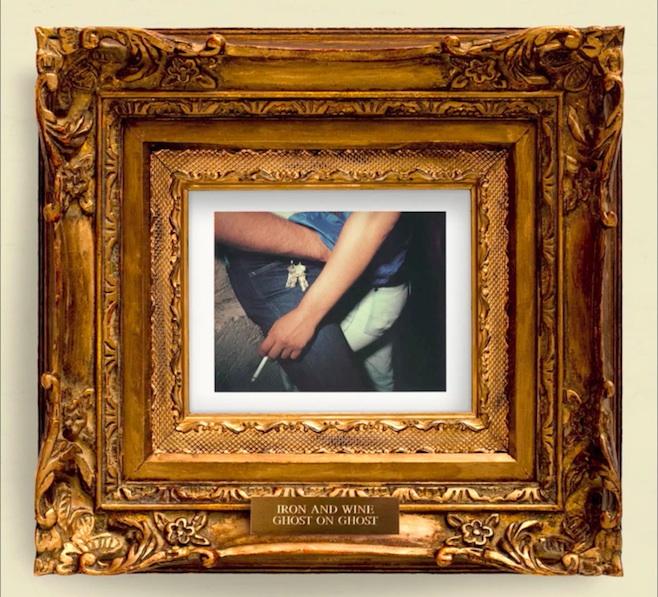 As one listens to Iron & Wine’s fifth studio album, “Ghost on Ghost,” it becomes clearer and clearer that the somber title is more sadly prophetic than anything else, as Sam Beam slowly and resolutely buries himself alive underneath the choking weight of his 11-piece band. Beam, a prolific lyricist known for his earnest and poetic verses, seems to have worked against his own grain on this newest album, building a muddy and crowded record that, ironically enough, often feels empty for all its extraneous stuffing. Tangled instrumentals aside, however, it is the album’s lack of Beam’s classically piercing lyrics that eventually leads the work to collapse under its own excessive weight.

Beam’s first two albums, “The Creek Drank the Cradle,” and “Our Endless Numbered Days”—which were released in 2002 and 2004 respectively—are startlingly simplistic. The tracks are full of cleanly intricate and hushed guitar lines that serves as lovely, moving skeletons for the flesh of the songs—Beam’s transcendent lyrics, which he delivers in a low voice that ranges all the way from a whisper to a murmur. Beam’s poeticism on these albums is the stuff of wonder, capturing raw, complex emotion in the space of a few lines. On these early albums, the occasionally over-pronounced strum of acoustic guitar was considered musical texture.

However exceptional Beam’s early work, it is still wildly unfair to lament “Ghost on Ghost” merely on the basis that it is not a plain reiteration of “Days” or “Cradle.” That’s fine, but “Ghost” has a host of problems and missteps that mark it as a mediocre album in its own right—its relation to Beam’s previous heart-rending albums only makes its flaws glare that much more brightly.

The album opens with a note of defiance—a few moments of clacking percussive beats which stumble over a bed of discordant feedback—as Beam seems to suggest that he could stray much farther from his simple crooner roots than he does on the ensuing track, which is held together by a self-consciously twanging guitar melody often punctuated by the interrupting blat of horns and shimmer of tambourine.

The complex instrumentals on this track feel like an evolution of Iron & Wine’s 2011 album “Kiss Each Other Clean,” for which Beam incorporated many new instruments in the attempt to create a new sound, one which, as he told Spin was meant to evoke “that early-to-mid-’70s FM, radio-friendly music.” However, on “Ghost on Ghost,” the band has gone beyond adding interesting and “friendly” texture. Instead, the overlapping instrumentals bring to mind an informal and often-confused orchestra of [horns, strings, and a tambourine whose many tight, high notes seem designed to distract.

Against all reason, Beam and his 11-piece band stay true to this newfound and problematic musical formula of “more is more” throughout the album, with the noise culminating in the bulging track “Lover’s Revolution.” The song opens with a jazzy horn pushing Beam’s quiet opening lyrics forward as he delicately enunciates, “I came to you, and you to me.” As the track continues, some raucous and unnecessary neighbors join the horn—first among them a shuddering percussive beat and a ragged group chorus that repeats Beam’s opening lines in muted yelps. A stumbling keyboard line makes its presence known, and in its wake comes a deep, staggering drum line and another chorus of high-pitched, ephemeral vowel sounds. On top of this mess he’s made, Beam sings with unusual force, giving each verse a kind of biting power. However, it is never clear whether this is an aesthetic choice or a necessity given the overpowering background noise.

Troubling musical experimentation aside, the true disappointment of this album is the flatness of Beam’s lyrics. On the inappropriately titled “Joy,” Beam hits a career first as he spins out some lyrics that are at once immature and unnervingly creepy: “Deep inside the heart of this troubled man / Lives and itty-bitty boy tugging hard at your hand.” He goes on to try to justify this with the almost-acceptable line “born bitter as a lemon, but you must understand, that you’ve been bringing me joy,” but the damage is already done, and he soon falls on clichés to save him—“I’m only frightened ’cause you finally gave me something to lose.” These lyrics echo and repeat themselves in a muted chorus behind Beam’s sugared voice, begging the question of why he thought that such banal sentiments would bear being reiterated. In contrast, the complex, dark-tinged sentiments that Beam wove in “Upward Over the Mountain,” back in 2002, would confound the simplistic narrative voice that has sway over this album.

Though complaints against a band changing its style often read as bitter, “Ghost on Ghost” is not merely underwhelming in relation to Beam’s previous releases. It is a disappointing album unto itself—complicated without depth, self-absorbed without reason to be.  Sam Beam, who has long been the patron saint of earnest mumbles, has abandoned his simplicity along with his sincerity in the name of grandiose experimentation. Unfortunately, on “Ghost on Ghost,” his bet has not paid off.

—Staff writer Sorrel L. Nielsen can be reached at sorrelwestbrook-nielsen@college.harvard.edu