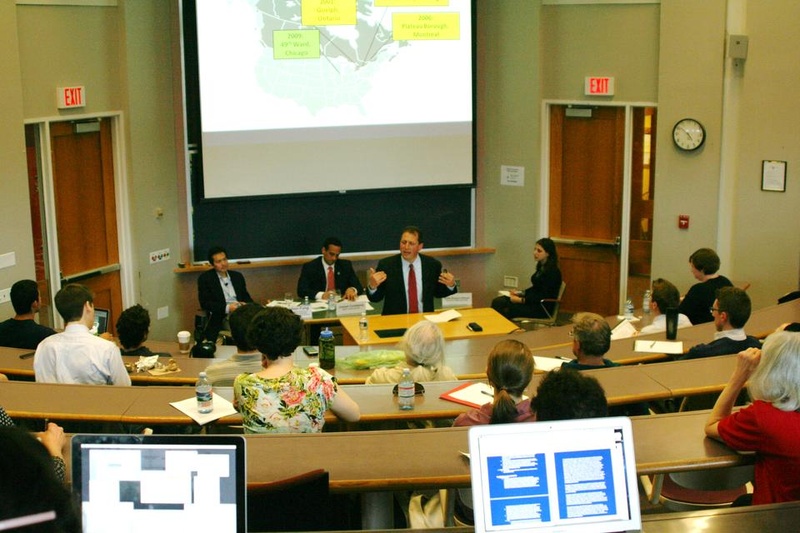 New York City Council Member Brad Lander and Somerville Mayor Joseph A. Curtatone discussed the role citizens can play in crafting a local budget in a talk about urban democracy and civic engagement at the Harvard Kennedy School on Wednesday.

“Recently, there’s been a rebirth of urban democracy. You see this in community policy, school involvement, etc,” said Kennedy School professor Archon Fung, who introduced the panel. “The deepest, most notable form of participatory democracy in the urban setting, however, is participatory budgeting.”

The process of citizens drafting their own communities’ budgets, known as participatory budgeting, has been adopted in locales around the world.

“Budgets strip away the rhetoric, people are paying attention and they know its their money at some level so the opportunity to engage a deep level of participation is very high,” said Lander.

The city of Somerville, where Curtatone serves as mayor, also engages citizens in the budget process. Curtatone said he believes that budgeting encourages a sense of shared public responsibility in decision making.

Duval B. Guimaraes, a second year Kennedy School student, suggested that the school consider establishing its own participatory budgeting process.

“We do have a student government budget, but it’s a good idea to consider having a participatory budget per school,” he said. “It’s always good to check throughout the process whether it’s a good idea to spend so much money on one thing rather than something with a much bigger impact on students.”

Both Curtatone and Lander said it was important not only to involve citizens in the budget conversation, but also to respond to public opinion about the municipality’s decisions.

Somerville does this in part by conducting a happiness survey, according to Curtatone.

“We have a very satisfied and happy constituency,” said Curatone. “But understanding what you can do with that information and how you can get more people to engage is most important. We’re tapping into subconscious preferences to make real world changes.”

“There is much going on in terms of using data to think about cities,” said Lander. “But the idea that citizen engagement and data involvement should go equally together seems obvious, and it’s great to see that happening more often in places like New York City and Somerville.”