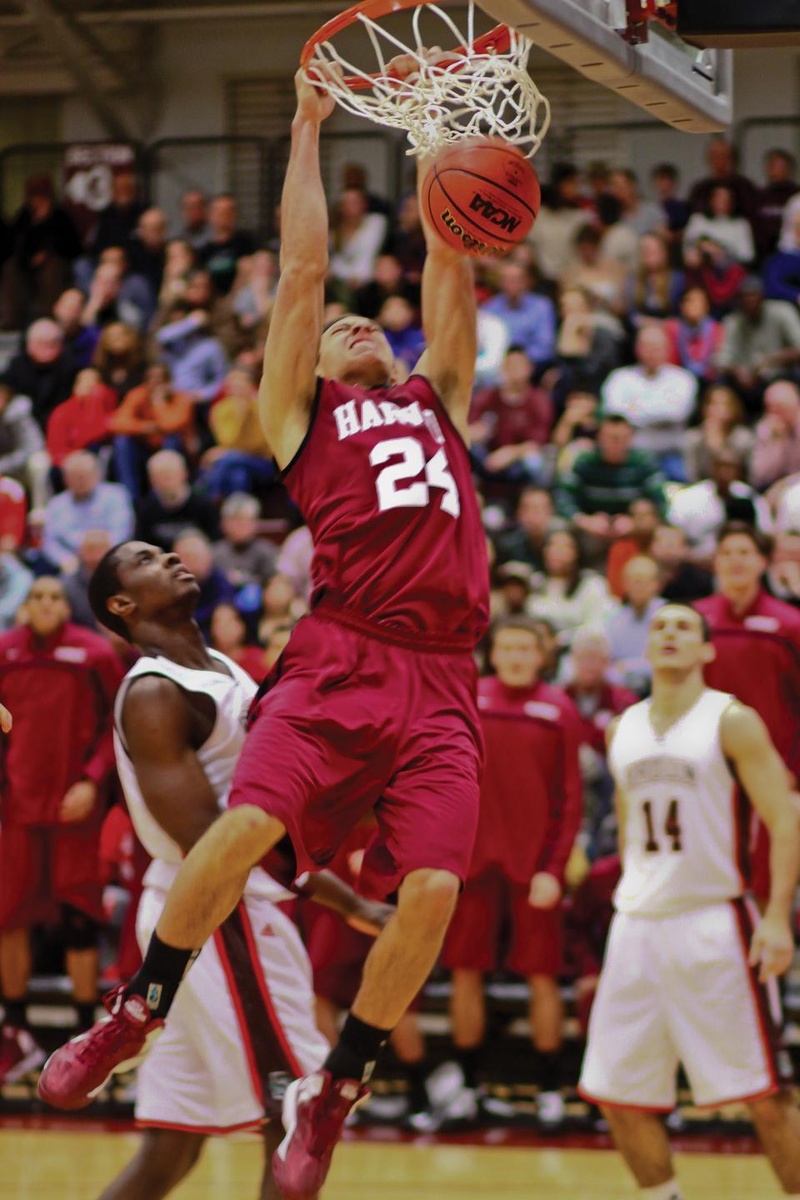 Harvard jumped out to a big lead on Saturday night, but an inability to adjust when Brown switched to a zone defense and the Bears' hot shooting forced double overtime. Sophomore Jonah Travis, above, scored just seven points, but his two emphatic dunks got the crowd going.

The Harvard men’s basketball team got off to a rough start in its home contest against Dartmouth on Jan. 26, ending the first half down by nine after a 7-for-21 shooting effort. The only thing preventing the team from being blown out on its home floor was the performance of sophomore forward Jonah Travis.

The Minneapolis, Minn., native came up big for the Crimson in its second straight Ivy contest against the Big Green, shooting four-for-five from the field in the opening frame and seven-for-nine on the night. And while late-game heroics came from a variety of places, particularly co-captain Christian Webster, Travis’s offensive presence was consistent throughout the game.

“He’s what we refer to as a ‘bring your lunch pail, roll up your sleeves, put your hard hat on’ kind of guy,” Harvard coach Tommy Amaker said. “And our program needs that. He brings that for our team whether he’s starting or coming off the bench. That’s been his role, doing a lot of the dirty work for our team.”

Travis has been a constant performer for the Crimson so far this season. But just a year ago, the sophomore would not have pictured himself as such a key piece of the Harvard lineup.

“I knew that it would be a bigger role than last year, but I had no idea by how much,” Travis said. “If you would have told me, I probably wouldn’t have believed you. But I really worked hard this summer just so when an opportunity presented itself, like when the season came, I wouldn’t be knocked back on my heels.”

Standing at just 6’6,” Travis is an unlikely candidate for starting center in a Division I program. But nonetheless, he has stepped into a starting role that last year was filled in large part by former Ivy League Player of the Year Keith Wright, who stands at a still moderately sized 6’8.”

Last season, Travis saw an average of 6.5 minutes per game in the post for a then-veteran Crimson squad that had graduated a total of zero seniors from arguably the best team in program history up to that point, fresh off of a share of Harvard’s first Ivy title in program history.

Despite Travis’s solid rookie campaign, the move to center this season—where Travis played throughout high school—came as a bit of a surprise.

“I wasn’t expecting to play center coming to college,” Travis said. “But if that’s where the team needs me to go, if it’s going to be the best route for our team having success, then I’m all for it.”

So far, Amaker seems to agree. While Travis contributed a solid 2.4 points and 1.7 rebounds per game as a freshman on the way to Harvard’s second straight Ancient Eight crown, his presence has been felt to an even greater degree this season. In 2012-13, Travis’s numbers—4.1 rebounds and 8.9 points per game on a league-best 61.8 percent shooting—speak volumes to the improvements he has made in one year.

According to Travis, despite being undersized for his position, he has been able to capitalize on his strengths—particularly when underestimated by his opponents.

“What I lack in size and maybe overall weight and height, I think I can make up for in just working hard and my footwork and trying to position myself in the right places so that I can be successful,” Travis said. “I have to end up playing a lot smarter just to kind of make up for what I don’t exactly have physically [in some] matchups. I know I always have to try to be in the right position, or I’m usually going to get burned.”

Travis also noted that the transition back to center forced him to work on new aspects of his game, adding additional challenges he did not face before college.

“I get a lot of slower guys on me, so I can always just sprint to the ball and roll hard to the basket,” he said. “I have to work on that because it doesn’t come naturally to me. In high school, I could just chill right in the lane and ask for the ball. I wasn’t used to sprinting all across the court, setting ball screens and everything, because we never set ball screens in high school.”

After seeing non-trivial minutes off the bench in the Crimson’s first few contests, Travis earned his first collegiate start on Dec. 4 in a 79-63 victory over Boston College. Travis did not miss a shot in the contest, converting on all five of his field goal attempts and going four-for-four from the line.