Who Is the Q Guide For?

More Than 30 Injured in Bus Crash Following Trip to Harvard 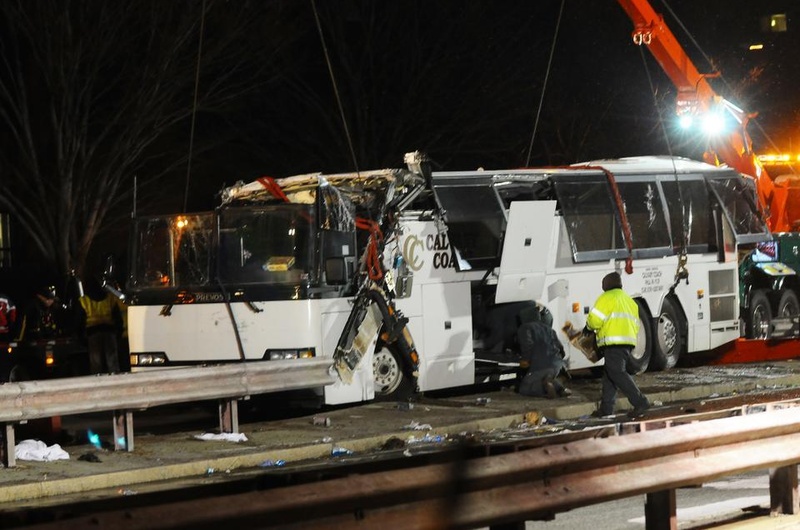 A charter bus believed to be carrying 42 passengers is damaged after a crash Saturday evening.

A charter bus carrying 42 passengers en route to the Philadelphia area crashed around 7:30 p.m. Saturday as it attempted to pass under the Western Avenue Bridge in the eastbound lanes of Soldiers Field Road. As many as 35 passengers, many of them high school students who had toured Harvard earlier in the day, were hospitalized with several sustaining serious injuries Saturday night, according to David Procopio, a spokesperson for the Massachusetts State Police.

Seven passengers remained in Boston-area hospitals Sunday evening, according to Desiree Goodwin, an assistant librarian at Harvard’s Graduate School of Design who was with the group before and after the crash.

Discharged victims spent the night in donated rooms at the DoubleTree Suites hotel in Allston and returned to the Philadelphia area Sunday evening, Goodwin said. 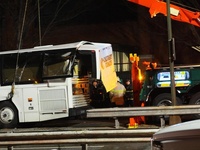 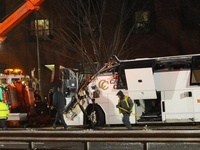 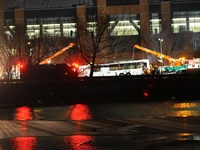 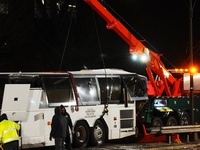 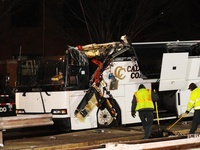 Goodwin said she and others, including Harvard undergraduates, rallied late Saturday night to help find food, shelter, and transportation for the victims.

The students involved in the crash were traveling on a day trip with the Destined for a Dream Foundation, a nonprofit organization in  Bristol, Pa. that serves at-risk youth. The foundation puts together periodic day trips to visit college campuses around the country, exposing high school students who might otherwise rule out college to opportunities in higher education.

During their trip Saturday, students met with a representative of Harvard’s Undergraduate Minority Recruitment Program at the College Admissions Office and took an official campus tour before having a group dinner at Uno Chicago Grill in Harvard Square.

The students came from various high schools in the Philadelphia area and in nearby Trenton, N.J., according to Goodwin. Erica Waller-Hill, the foundation’s founder, led the trip.

The collision badly damaged the bus, ripping off a large portion of the bus’s roof.

State Police first received a call about the accident at approximately 7:45 p.m., according to State Police trooper Reid Bagley. Dozens of firefighters rescued passengers from the wreckage, including four who had to be cut out of the bus. All passengers were rescued by 9 p.m.

Procopio wrote that due to its size, the bus should not have been on the stretch of road or tried to pass under the bridge, which has a 10-foot clearance. He added that “the driver will likely be cited for an overheight violation.”

Police have identified the driver of the charter as 66-year-old Samuel J. Jackson of Philadelphia.

The charter was operated by Calvary Coach, a small Phiadelphia-based charter service. The company’s owner Raymond Talmadge told Philadelphia’s NBC affiliate NBC 10 that Jackson was looking at a GPS device, not the road, as he approached the Western Avenue Bridge.