Poetasters and Poet-Masters: Slam Night at the Cantab Lounge

Last Wednesday at the Cantab Lounge’s weekly poetry slam open mic, no one snapped and hardly anyone wore black.

Last Wednesday at the Cantab Lounge’s weekly poetry slam open mic, no one snapped and hardly anyone wore black. The doors opened at 7:15 p.m., and when I arrived 15 minutes later, the only space that remained was a particularly sticky square foot of the floor. The black-walled basement was somehow more divey than the upper floor and smelled like illicit smoke.

The patrons holding plastic cups of water and beer and wilted slices of pizza were all, from an unscientific poll, repeat visitors. Everyone’s features were unspecific in the reddish light and no one took off their puffy jackets even in the packed room. Tonight we would hear from poets who had conscienciously signed-up in advance, waitlisted ones who hadn’t been as diligent, the headliner, Wes Hazard, and the eight competitors in the elimination-round “speed slam.” I could spot the competitors around the room, still scrawling into legal pads and Moleskines, all nerves, oblivious to the emcee.

The first, sacrificial entrant finally got up around 8:00 p.m. He read off a poem from an iPhone, his voice lapsing, more than once, into a Southie accent. Will Hunting was mentioned. The second read uncannily like T.S. Eliot circa “Prufrock.” The next few poets were likewise dissimilar: a father in a bowling shirt, a man in a sweater he admitted was accidentally bought without reading the “3” in “3XL,” a young woman in a beanie and plastic glasses. Once, the emcee accidentally subbed “poetaster” for (I think) “poet-master.” It was a slip, but not a Freudian one.

Some dozen poets in, I convinced myself that I had found the reason that people write metered plays. Spoken word, close as it is to unfiltered speech, is nevertheless strongly patterned, metered, rhymed, alliterated—not just by the virtuosos, but also by the absolute novices. It is not so far a cry from this, I thought, to five acts in iambic pentameter.

And then—the testicle poem: “Testicle Pain is Only Fun If It’s Not Yours.” This for the full, allotted 180 seconds. If a poem is, in fact, the best words in the best order, then an awful lot of said words were: “testicle.”

I had to duck out before the speed slam, rustling a dozen puffy coats on the way. The Cantab, I learned while leaving, is this year’s home of the National Poetry Slam. But just before I turned the doorknob, a sudden hush in the crowd gave me pause. The very recently outgrown teenager at the mic held neither iPhone nor laptop nor legal pad, which was immediately promising. He launched into “This Might Hurt a Little but It’s Ok Because You’re a Bitch,” a vicious aubade (two words I’ve never had to combine). It was perhaps the most aurally pleasing diatribe I’ve ever heard, and between his refusal to pause for breath and the crowd’s adoration, I was quite sad to leave. 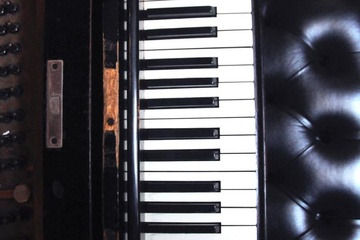 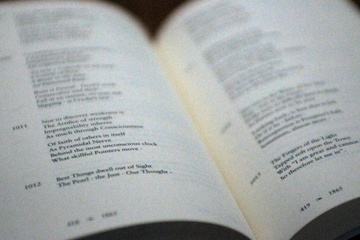 Poetry Reading at Houghton to Focus on Ecology 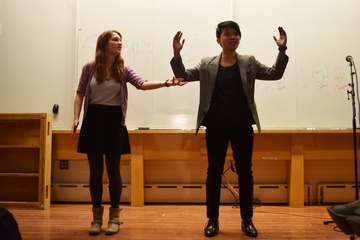