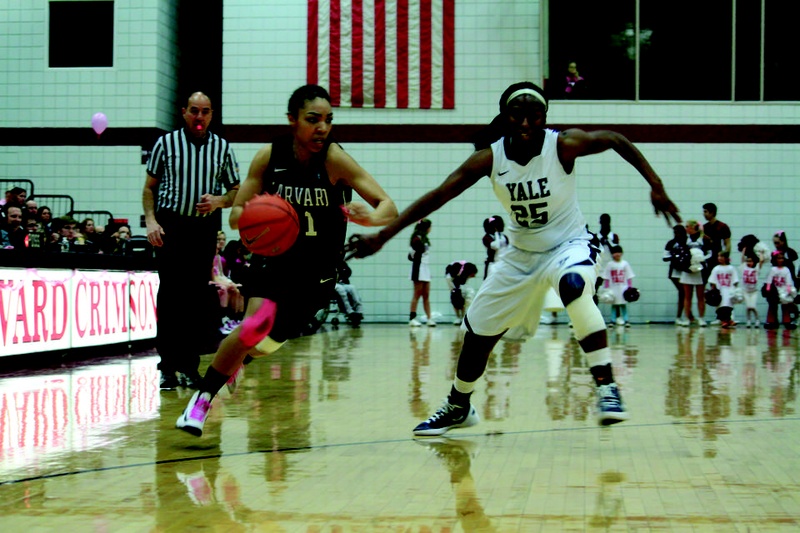 Junior guard Jasmine Evans has been troubled by injuries throughout her career at Harvard, twice having to take time off to recover. This year, Evans is back in the lineup and earning praise for her on-ball defense.

It takes a lot for any varsity athlete to make his or her comeback. It takes even more to do it again. However, for junior Jasmine Evans of the Harvard women’s basketball team it was the only way for her to stop “feeling like [she’d] been robbed.”

Evans was originally recruited for the Class of 2013 as a versatile guard with enormous athletic potential. But this potential was not seen during her freshman year, as she tore her ACL during preseason practice. Evans sat out her entire first season, deprived of any game time.

Evans returned to the court her sophomore year and proved a valuable asset to the team, averaging 3.3 points and 3.1 rebounds per game. She netted her current career-highs during that season, including a particularly strong game at Holy Cross where she netted 12 points, going 5-for-7 from the charity stripe.

“We were curious to see what her court IQ was going to be as a sophomore and what her condition as a college player was going to be,” Crimson coach Kathy Delaney-Smith says. “She was phenomenal. She was first guard off the bench.”

But injuries soon plagued Evans again. A broken hand, a broken foot, a concussion and more knee troubles stopped Evans in her tracks at the end of her sophomore year. Facing another knee surgery that summer, Evans decided to take the next year off to heal and stay healthy.

“I didn’t need to push anymore,” Evans says. “I had to sit down, relax and just let everything heal.”

As time went on, she made it back to the floor to regain her strength and previous level of talent.

“Around springtime, I was back in the gym shooting, running, doing whatever I could to get back in shape and get back to where I was before I got injured,” she says. “It was definitely hard not to be able to play with other college girls during that time. I went to my high school a lot and practiced with my high school team.”

Her return to basketball wasn’t just physical—Evans spent her free time watching the game on television and in person, regaining her intuitive sense for the sport. Described by Delaney-Smith as someone for whom “the sky’s the limit as to what she can do because of her athleticism”, Evans credits her time off for some of this basketball IQ.

“I feel like I am smarter at the game of basketball, just from watching it and sitting out my freshman year,” Evans says. “Being gone for a year and watching it every single day, I’ve learned a lot about the game, being able to read players and being able to figure out how the game is developing as it goes along.”

Back in Cambridge this year, she’s seen game time in all 23 of the squad’s games thus far. While she puts up an average of 3.3 points per contest, Evans’ strength remains in her defensive abilities.

Still, the nature of her injuries has changed her playing style. Unable to run as fast as she once could and more cautious of hard cuts to the basket because of her knees, Evans admits a new focus on “other skills like shooting, dribbling and being able to be put in a point guard position.”

But her basketball comeback concerns even more than the actual sport. The new member of the Class of 2014 has had adjust to a new team dynamic and the return to academics. She has coped with the arrival of two new classes of players and the challenges of the classroom.

“The first month, it was a little hard, but the girls on the team are so great,” Evans says. “They make that transition very easy.”

Evans remains unique as a one of just a few female athletes at Harvard who has taken a mid-career gap year and, even more notably, made the journey back to her sport. Her resilience comes from a true love for the game and the dedication to her teammates. Evans felt that coming back at just 50 percent would deny her the opportunity to help her team in the way that her peers and coaches would want.

“Most likely for women, they’re not going to pursue being a professional athlete,” Evans says. “Losing that one year makes a big difference because you may or may not play after college…. I thought the best decision was to take a year off, grow, get healthy, and come back and be stronger as a better player.”

Oscar Picks: The Back Page Edition