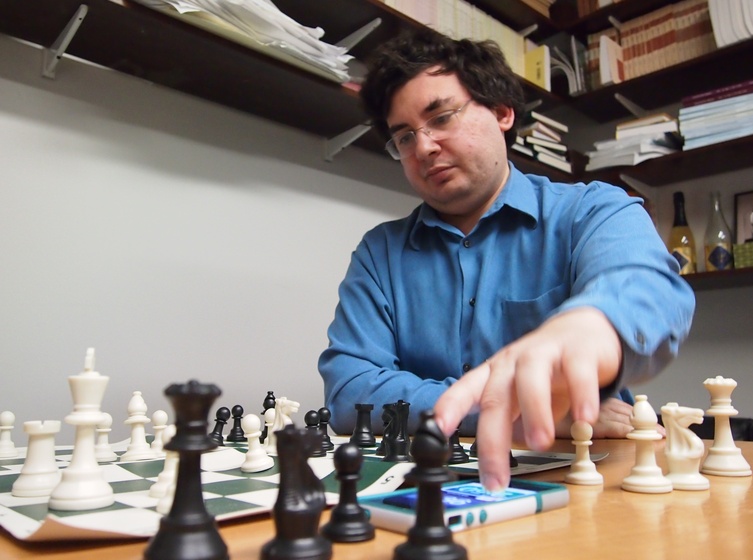 Chess with Blitzstein & Elkies: The Pawn is Mightier than the Sword

Both Blitzstein and Elkies are known to be terrific chess players. Blitzstein is ranked as an “Expert” by the US Chess Federation, placing him in the 98th percentile of tournament players. Elkies is ranked even one step higher as a “Master,” and specializes in solving and composing chess problems. Both have been playing chess for as long as they can remember, but the serious mathematicians have found it difficult to find time for their favorite game at Harvard. FM asked the two to revive their passion for a quick match of speed chess.

On an uncharacteristically warm November evening, a preeminent Harvard statistician sat at a small round table in his office, across from an equally-accomplished colleague in the mathematics department.

The two professors leaned over the table in total silence, so close that their heads almost touched, their eyes fixed below them. One tapped his lip with his right index finger, the other scratched his head. Each focused entirely on the table’s surface: a green and white chess mat upon which knights, queens, bishops, and other pieces were poised in battle.The two professors were Joseph K. Blitzstein, who teaches the popular class Statistics 110: “Introduction to Probability,” and Noam D. Elkies who won the famed Putnam Competition when he was only 16 and will teach Math 25b: “Honors Linear Algebra and Real Analysis II” in the spring.

Both are known to be terrific chess players. Blitzstein is ranked as an “Expert” by the US Chess Federation, placing him in the 98th percentile of tournament players. Elkies is ranked even one step higher as a “Master,” and specializes in solving and composing chess problems. Both have been playing chess for as long as they can remember, but the serious mathematicians have found it difficult to find time for their favorite game at Harvard. FM asked the two to revive their passion for a quick match of speed chess (“Or should I say ‘Blitz’ game?” Elkies responded wryly when we first proposed the idea to him in an e-mail.)

The “blitz” game gave each player a total of five minutes to make all of his moves for a maximum potential game time of ten minutes, a period much shorter than that of standard tournament games, which can last up to six hours.

The match not only pit the former child prodigy against the statistics whiz, but also brought two faculty advisors of the Harvard Chess Club together in a rare game.

We met in Blitzstein’s office on the seventh floor of the Science Center, a small room whose every surface was covered in piles of problem sets, statistics books, and a collection of quotes by the popular “Game of Thrones” character Tyrion Lannister. Between two bookcases hung a collection of certificates, including Blitzstein’s five “favorite professor” awards, granted by the Harvard Yearbook to a number of faculty members each year.

Blitzstein pulled out his chess mat from a box in the back of the room, and set up the board, scrambling to find missing pieces including the black king. A few minutes later, Elkies arrived, wearing his signature thick, round glasses and a Lowell House Opera polo shirt. The music, math, and chess prodigy greeted Blitzstein happily.“I guess if you don’t have a king you lose automatically,” Elkies teased, referencing Blitzstein’s missing pieces. Elkies offered to grab his own black king from the set in his fourth floor office.

Elkies sprinted back into the room after two minutes, just as Blitzstein found the pieces behind a cabinet. Blitzstein placed the final pieces on the board with care, and both professors took their seats at opposite ends of the table. Blitzstein leaned back in his chair while Elkies hunched over a notepad, doodling in the margins.

After discussing the game, the professors straightened out the pieces one last time and pulled their seats closer to the table, finally prepared to play. “One of the things about math and chess is that we’re better at doing it than philosophizing about it,” Elkies said.

When the game commenced t0he atmosphere of the room changed entirely: Blitzstein and Elkies seemed to be absorbed in a different world. Their eyes shifted between the board’s green and white squares and the chess clock app on Blitzstein’s iPhone. The first few moves were made so quickly that the pieces’ positions seemed to change with each blink.

Elkies and Blitzstein moved their pieces toward the center of the board. A few pawns were captured. After about two minutes, each professor had seized one knight and one bishop from his opponent. The positions of the pieces seemed to mirror each other on each side of the board; the professors both wore pensivel expressions. To untrained eyes, the game surely looked to be a tie.  But then Blitzstein moved his king to H4. Suddenly a look of surprise flashed over Elkies’s face. Blitzstein had done something unexpected—whether that was good or bad remained to be seen.

About 30 seconds passed, and then, with just under a minute for each professors to spare, the tension broke. Blitzstein looked up from the board, met Elkies’ eyes, laughed lightly, and shook his hand: “I resign.”

The game had ended in eight minutes, but the professors were not quite ready to leave the world of chess.

Elkies grabbed his notepad and pencil again and began scribbling a messy set of letters and numbers. While Blitzstein explained the progression of the game to us, Elkies compiled a list of coordinates and chess pieces, occasionally pausing to glance at the board or lift up a piece and reposition it somewhere else. After writing down about 10 moves entirely from memory, he checked his work with Blitzstein.

In a matter of minutes, the two reconstructed their entire game, with stoic and humble commentary about whether their choices had been optimal and when the tide had turned in Elkies’s favor. They recorded a total of 35 moves per player as they discussed the overall strategy of the game as well as their individual tactics. “There’s both short-term, ‘I go here, he goes here,’ thinking, and long-term, deeper thinking,” Blitzstein explained. The pair determined that it had been Blitzstein’s move of his king to H4, the left edge of the board, that cost him the game.

“Remember ‘the square of the pawn’?” Elkies said to clarify, referring to a strategy he had mentioned earlier. If a diagonal line can be drawn from a pawn to the opponent’s king at the end of the board, he explained, the pawn will not be able to reach the square where it would be promoted to a queen. Blitzstein had moved his king outside of the square, opening up his end of the board to Elkies’s advancing pawns.

Blitzstein then knew he had no chance.

“I shouldn’t have done that,” he said. “But when you have five minutes for a whole game, it’s more important to play some move than no move at all. You have to go with your instincts, use some cheap heuristics.”

With the game and its analysis finished, Blitzstein packed up the board and placed his pile of statistics problem sets back on the table. He sat at his desk, perhaps getting ready to compile another data set or prepare for his lecture on Monday. Elkies rode the elevator back down to the fourth floor, where he might have immersed himself once again in the realm of number theory and algebraic geometry.

The chess mat and all 32 pieces (the set fully complete, this time) were stowed in a cabinet in the corner of Blitzstein’s office: a game waiting to be played and world waiting to be reentered, if only for another eight minutes.