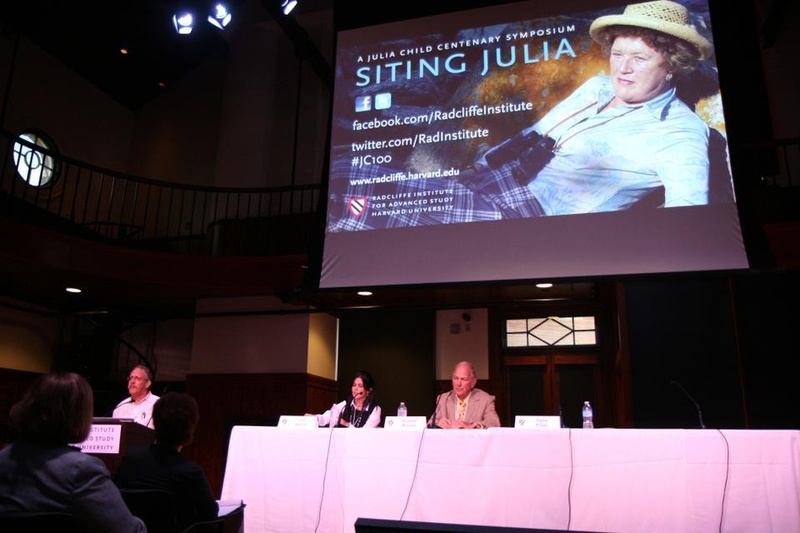 From left, Dana Polan, Lisa Abend, and Russell Morash, present stories and research about Julia Child's years on national television at "Siting Julia," a Centenary Celebration of the late chef and television star.

Audience members gathered to commemorate what would have been the 100th birthday of American chef, author, and television personality Julia Child at an event hosted by The Schlesinger Library at the Radcliffe Institute for Advanced Study last Friday.

In her welcoming remarks, Dean of the Radcliffe Institute for Advanced Study Lizabeth Cohen noted Child’s role in changing how the public approached the development of culinary skills.

“[She was famous for] promoting the idea that cooking can be taught [and that] cooking is a science,” she said.

Keynote speaker Laura Shapiro ’68 said that, despite Child’s unassuming style of instruction in print and on television, her fame impacted the construction of gender norms. 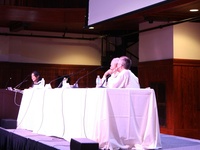 “She was never narcissistic,” she said. “She taught Americans how to cook and how to think [about women in the kitchen.]”

“No one ever called Julia a ‘little woman,’” Shapiro added.

Audience members, many of whom personally witnessed her rise to fame, credited Child with provoking a profound societal shift in thought with regards to conventional roles within the home.

Priscilla F. Kauff ’62 said that Child redefined cooking as a career and art form, rather than as a domestic duty.

“[She] legitimized and raised the level of cooking so, as a woman, you didn’t have to feel it was demeaning to cook,” she said.

Kauff added that Child’s television show, which she first encountered while learning how to cook for herself after graduation, also captured her husband’s interest at the time.

Kennie S. Lyman ’62 said that Child did not conform to traditional gender stereotypes of the time.

“[Child] was so radically different from the concept of the wife who had dinner ready,” she said.

Speakers introduced a song written by the late Rev. Peter J. Gomes entitled “O Julia Child.” The lyrics were projected onto a screen, accompanied by a piano. Audience members joined together in song to celebrate Child’s life and legacy.

The event, due to popularity, was broadcast online and at several locations on campus. Audience members also Tweeted alongside the webcast.