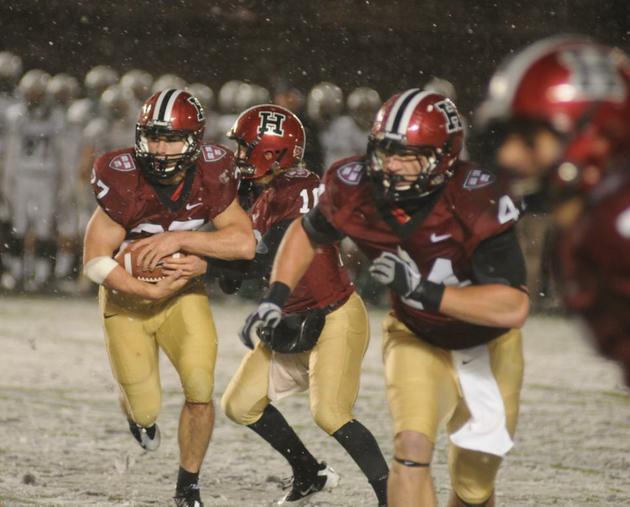 Freshman running back Zach Boden’s biggest game of the year came against Dartmouth, when the rookie scampered for 112 yards.

Excelling in one sport your freshman year is hard enough. In two? That’s almost unheard of.

But rookie Zach Boden pulled it off.

Boden first rapidly ascended the football depth charts to become one of two pivotal running backs on the Ivy-champion Harvard football team. Then, in the spring, the rookie walked on to the baseball team, where he had the team’s second highest batting average at one point before injury cut his season short.

Though recruited for football, Boden wasn’t ready to give up baseball just yet. And in the future, though he sees himself as a football player first, he plans to continue both.

“Football is more like a job, baseball is more [for] fun, I guess,” Boden says. “Although I love playing football more than anything else in the world.”

When the Georgia native first broached the idea of joining the baseball team, Crimson coach Tim Murphy was skeptical, worrying that Boden would struggle balancing the time demands of both sports.

But months before that decision, the rookie had already made his name on the gridiron at running back.

After starting the year on the scout team, Boden cemented his status on the first squad with a standout performance in a preseason scrimmage against Dartmouth when the team’s number one running back, junior Treavor Scales, was benched to avoid risking injury.

“[In the game, Boden] busts a couple big, impressive runs and from then on in, we say, ‘Hey, we can rationalize all we want, but this kid is our second best running back,’” Murphy says. “And the rest is history.”

Ten games later, Boden had run for six touchdowns and 484 yards on just 79 carries, good for a team-best 6.1 yards per carry. The rookie’s performance of the season came in a 112-yard outburst against Dartmouth in a snowstorm, when he, Scales, and senior quarterback Collier Winters became the first trio in Harvard history to each run for 100 or more yards in a single game.

“The Dartmouth game on the whole was just crazy fun. That was awesome,” Boden says. “It was a whole other world compared to playing down in Georgia.”

Boden followed up his strong season on the gridiron with another solid showing on the baseball diamond.

Boden finished with a .314 batting average and six stolen bases, sixth best and second best on the team respectively. All that while not seeing any Ivy League action, when offensive production numbers were generally higher, because of an injury sustained a week before football’s spring game.

“[Harvard baseball coach Joe Walsh] didn’t really have to give me playing time or anything, but he gave me the opportunity,” Boden says. “And I just kind of ran with it. It was sweet.”

Despite making an immediate impact on both teams in his first year, this appears to be just the beginning for the rising sophomore.

“We don’t exactly know what we have yet,” Murphy says of Boden. “But the potential is really exciting.”

—Staff writer Robert S. Samuels can be reached at robertsamuels@college.harvard.edu.