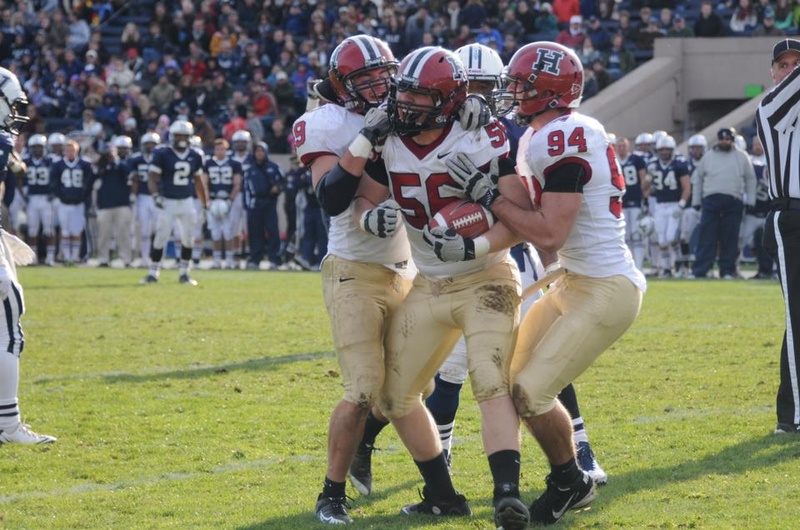 Sophomore defensive tackle Jack Dittmer celebrates after intercepting a Patrick Witt pass in the Harvard football team’s annual contest against Yale. The Crimson routed the Bulldogs 45-7 in the 128th playing of The Game.

The Crimson had just started its season with a 30-22 defeat at Holy Cross and lost its starting quarterback, fifth-year senior Collier Winters, to a hamstring injury in the process.

“There’s a lot of emotion tied into the first game, so it was very tough [to lose],” Harvard coach Tim Murphy says. “We were sloppy, we made mistakes, we beat ourselves.”

With Ivy League play about to begin, it looked like the Crimson could be on the verge of a disappointing year. But flash forward eight weeks, and Harvard had instead completed one of the most dominant seasons in its history, finishing 9-1 and a perfect 7-0 in conference games while scoring more points than any Crimson squad in the modern era.

Things started to come together the week after the Holy Cross game in the team’s home opener under the lights at a rain-soaked Harvard Stadium. Junior backup quarterback Colton Chapple threw two touchdowns, classmate Treavor Scales rushed for 129 yards, and the defense forced five turnovers in Harvard’s 24-7 win over Brown.

In the Crimson’s next contest against Lafayette, the defense was dominant again, limiting the Leopards to 1.4 yards per carry, registering five sacks, and forcing two fumbles to lead Harvard to a 31-3 win.

It was the offense’s turn to shine the following week, as Harvard escaped a shootout at Cornell with a 41-31 victory. In the win, Chapple threw for 414 yards—the second highest single-game total in Harvard history—and four touchdowns to outduel Big Red quarterback Jeff Mathews, the eventual Ivy League Offensive Player of the Year, while seniors Alex Sarkisian and Chris Lorditch became the first pair of Crimson receivers to eclipse 100 receiving yards in a single game since 2008.

“That was really an eye-opener,” Murphy says. “To put up not just solid offensive numbers but really impressive offensive numbers was just a huge emotional lift. At that point we felt like...we had the potential to win a championship.”

Back home the following week, the Crimson put together its most complete performance of the season, dominating Bucknell, 42-3. Harvard held the Bisons to -5 rushing yards—compared to 224 for the Crimson—while intercepting four Bison passes, including three inside its own five-yard line. Offensively, Chapple threw for five touchdowns before being pulled in the third quarter, becoming the first Harvard quarterback to throw for four or more scores in consecutive games and the second to throw five in a single contest.

“Colton did such a great job,” Winters says. “I think he was really prepared and ready for his opportunity, and he stepped in for me and kept things rolling.”

Winters returned the following week against Princeton, matching Chapple by throwing for 403 yards and five touchdowns of his own in the Crimson’s 56-39 win. Harvard held a commanding 42-16 lead before 23 unanswered Tigers points pulled Princeton within three early in the fourth. But Scales responded with a touchdown run, captain Alex Gedeon picked off a Princeton pass, and Winters hit sophomore tight end Cam Brate in the end zone to seal the win.

Heavy snows at Harvard Stadium could not slow the Crimson offense the following Saturday as Harvard steamrolled Dartmouth, 41-10. The Crimson took advantage of the weather and rushed for 395 yards, with Scales, Winters, and freshman Zach Boden each topping 110 yards and scoring two touchdowns. In so doing, they became the first Crimson trio to eclipse the century mark on the ground in a single game.

One week later, Harvard went into halftime tied with league bottom-dweller Columbia, but outscored the Lions 21-7 in the second half to win 35-21 and help Murphy pass Joe Restic for first place on the all-time Harvard coaching wins list with 118. In the victory—which gave the Crimson an Ivy record 11 straight seasons with at least seven wins—Harvard went back to the air, with Lorditch and junior tight end Kyle Jusczcyk each surpassing the receiving century mark and Winters throwing for 323 yards and three touchdowns.

The Crimson clinched its 14th Ivy title, and sixth under Murphy, in the season’s penultimate week by topping Penn, 37-20. After falling behind 7-0, Harvard responded with 37 unanswered points, while the defense—led by senior Josue Ortiz’s 10 tackles, two sacks, forced fumble, and fumble recovery—limited the two-time defending-champion Quakers to just 24 yards on the ground and forced three turnovers before the celebration began.

“We work so hard throughout the winter, summer workouts, the preseason, and finally the season, and we’re all working for one goal,” Chapple says. “At the end of the year when we hung up that cup, everything came into perspective, and we all realized that the hard work we put in was worth it.”

Though on paper it had nothing to play for in its season finale—the 128th rendition of The Game—Harvard was as dominant as it had been all season long. In their final collegiate contests, Winters threw for 355 yards and two scores, Gedeon returned an interception—one of three for the day on the Crimson—for a touchdown, and Ortiz earned his 10th sack, helping Harvard surge to a 45-7 win, its fifth straight and 10th victory in 11 games against archrival Yale.

“It was probably the most dominant finish to a season that we’ve had,” Murphy says. “I’m really just proud of how our team finished.”

At the end of the year, the Crimson had recorded a school record 374 points, while Ortiz won Ivy League Defensive Player of the Year and 16 others made All-Ivy teams.

“You really appreciate and respect when a team rises to the challenge like that,” Murphy says. “To finish the season so dramatically playing its best football, it leaves an indelible imprint on that senior class and on that team. That’s how you script it.”

—Staff writer Scott A. Sherman can be reached at ssherman13@college.harvard.edu.