Tattoos require a unique relationship between work and creator. 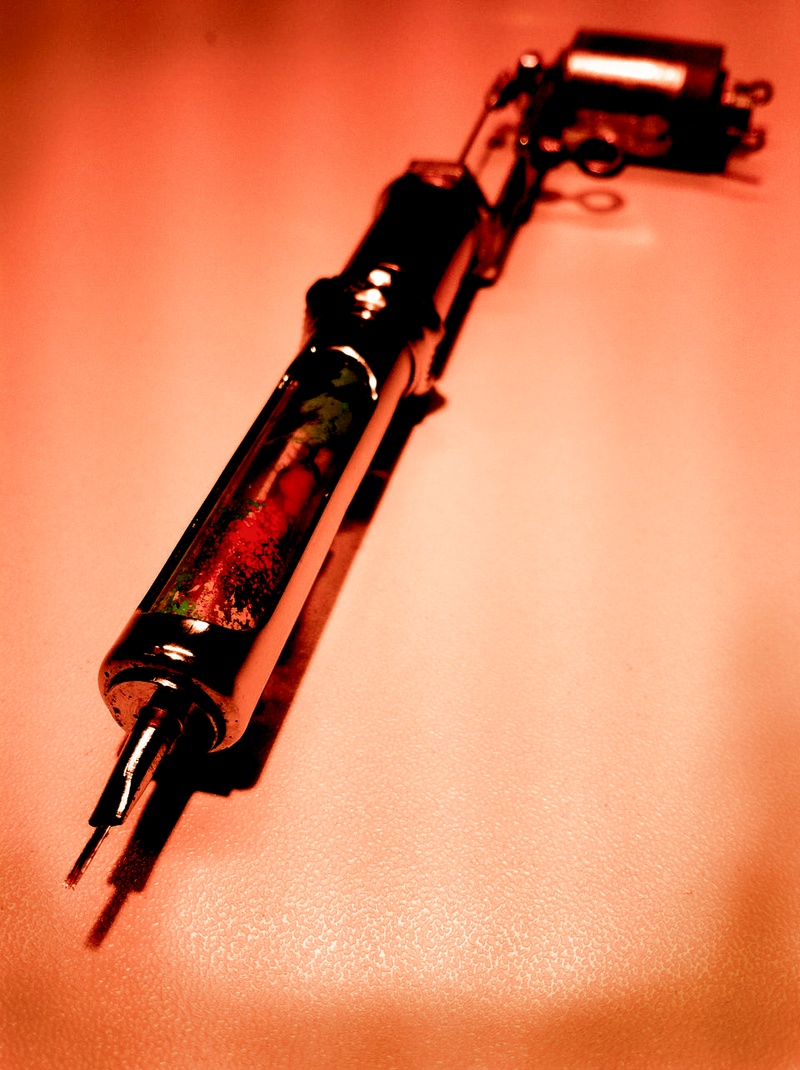 “Jesus, don’t stare. It’s just a meat painting,” says an older woman in the row behind me. Her husband clears his throat before responding, “I wasn’t,” in a strained whisper.

The theater is dark, and we are waiting for the movie to start. I wonder where this “meat painting” is. I briefly hope that there is a decorated ham somewhere in the theater. Then I remember that my hair is up, and the tattoo of California poppies on the back of my neck is visible to the now conspicuously silent couple seated behind me.

Got it. It’s me. My neck is the meat painting.

I’m not sure what the etiquette here is. Do I introduce myself? Take down my hair to cover the offense? Grab my crotch and yell “punk rock?” I sit there as the show starts, hair up, tongue held, brain humming. I’m not angry or embarrassed. I’m struck by the accuracy of her description: meat painting. Yes, it likens me to an entrée, but it also viscerally hits upon the most compelling and basic facet of tattoos—flesh as canvas. There is no material more difficult to escape. Carve a tree, chisel some marble, and you can leave it behind. Inking skin requires the confidence, however foolhardy, that a chosen image or series of letters is beautiful or important enough to bear on your skin for a lifetime.

The art of the tattoo is situated between the exotic and the quotidian. Tattoos can be ornate and nearly overwhelming in their vibrancy, but even the highest artistry cannot lift them from the day-to-day actions of their wearers. They are present for every snore and tooth-brushing; tattoos are art that you live in.

Social skirmishes and practical concerns aside, tattoos require a unique relationship between work and creator. “There’s a certain feeling of letting go,” says a local tattoo artist who goes by the name Joe Boo. “You let a complete stranger modify you forever…. It’s a very important interaction.”

The allure and the complication at the heart of the tattoo is this: the canvas talks back. The artist does not have the luxury to let their imagination run wild. Flesh, once marked, can’t be erased or crossed out. By the same token, the client, that living canvas, has an emotional and physical stake in the planning and execution of the art.

For some, the idea of such collaboration would be stifling, even terrifying. For Boo, who works at Chameleon Tattoo & Body Piercing, it can be profound.

When I arrived to interview him, the air in Chameleon buzzed with the sound of tattoo machines. Boo is lanky, bearded and, of course, tattooed. A few inches of bright tattoo sleeves are visible between his wrist and his shirt. Boo, who also paints, says that the technique of tattooing relies on sound of the equipment and his own sensation. “You’re listening for a sound…and a certain level of vibration that you can feel in your hands,” Boo says. “I can equate it to driving stick…. You’ll hear what the engine is doing…and you can feel the terrain…. [It’s as] if you could cross driving stick with watercolor paint, or an ink pen.”

The tattoo machine itself, defined by Boo as a “rattling, far-out contraption,” is only part of the process. The clients bring a host of opportunities—and possible complications—to the studio. “Your canvas is going to be very moody and sensitive and prone to moving,” Boo says. “You have to be comfortable with people, and sometimes people can be a pain in the ass.” A prime example is Boo’s first client, who wanted to cover up a name in an intimate area with a series of small black hearts. “Her current old man wasn’t really fired up about whoever’s name was down there,” Boo says. The woman was a difficult customer, refusing to pay the minimum fee of $55, but insisting the work be done. Boo remembers being shocked when his boss consented. “Finally he said, ‘Okay, we’ll do it.’ I was like, ‘Woah, man, you’re going to tattoo that crazy girl?’ And he said, ‘No, you are.’” Boo says. “So my first tattoo was…on that wretched woman’s privates, which was a nightmare…. It took me an hour because I was freaking out the whole time.”

Luckily, that agonizing experience has been followed by many satisfying ones throughout Boo’s career. For him, the client’s attitude dramatically affects his process. “A good day for me isn’t cool tattoos, it’s cool clients,” Boo says. “I’m happy doing a shamrock, I’m happy doing a back piece. I get to hold a tattoo machine—I’m happy.”

In their search for a tattoo artist, many clients look for a connection that resembles friendship more than a business transaction. Joshua L. Boyd ’13, who has 10 tattoos, didn’t meet his favorite artist until he got his fifth. “Our conversations are great…. It’s just overall a good relationship, good vibe. I trust him,” Boyd says.

A junior at the College, who was granted anonymity by The Crimson because she does not want her Jewish grandparents to know about her tattoos, has six pieces all done by the same artist. “I’m in love with him,” she says. “It’s good to have someone who’s really funny and snarky and can keep the conversation going.” She said conversational chemistry is highly important in a tattoo parlor, as having someone to there to talk to distracts from the pain you’re paying to experience.