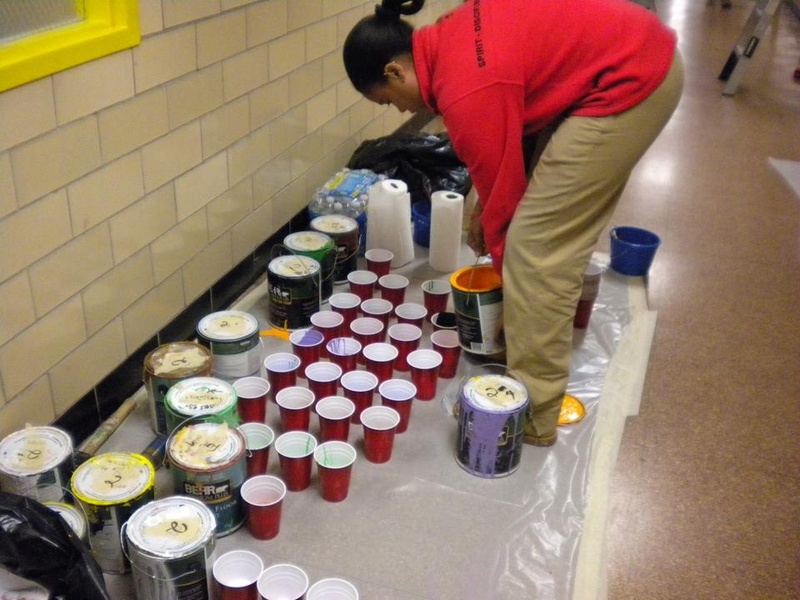 At a turnaround elementary school in Hyde Park on Saturday, a group of Harvard Graduate School of Education students teamed up with a local public service organization to help brighten the hallways with inspiration.

For the project, coordinated by the Graduate Students in Various Efforts of Service program of the Ed School Student Affairs Office, students painted the hallways of Elihu Greenwood Leadership Academy with quotations about learning, self-expression, and cooperation.

The Boston chapter of City Year—a service organization founded by two Harvard Law School roommates that focuses on leadership development—spearheaded the quote selection process and outlined each letter across the walls prior to Saturday’s engagement.

The hallways at the Leadership Academy, which was named one of 12 turnaround schools in Boston Public Schools, were carefully lined with quotations from notable figures such as Barack Obama, Martin Luther King, Jr., and Dr. Seuss.

GIVES, which began three years ago, is a program sponsored by the Ed School Student Affairs Office that creates opportunities for students who wish to participate in community service. Ficula coordinates efforts with other organizations to work with homeless shelters, families in need, and other local community service projects.

“We’re trying to get people excited about service,” Ficula said. “We’re in education to give back.”

For Claire J. DeBord, a student at the Ed School who was on the painting trip, the potential reactions of the elementary school students when they return to school on Monday excited her most.

“I think it shows the importance of crating an environment that encourages students, encourages learning,” she said of the project. “A lot of education is about the subtleties.”

Ed School student Nora D. Maginn echoed the sentiment when she reflected on the problems in public school education discussed in her classes: “This is a small thing to do to change a kid’s day,” she said.

The GIVES program has more service projects lined up for the end of the semester and the spring, including a Christmas Drive at the beginning of December.

“I want [GIVES] to have forward progress,” Ficula said. “I want it to be something that builds and builds, and people start to hear about it.”

—Staff writer Xi Yu can be reached at xyu@college.harvard.edu.