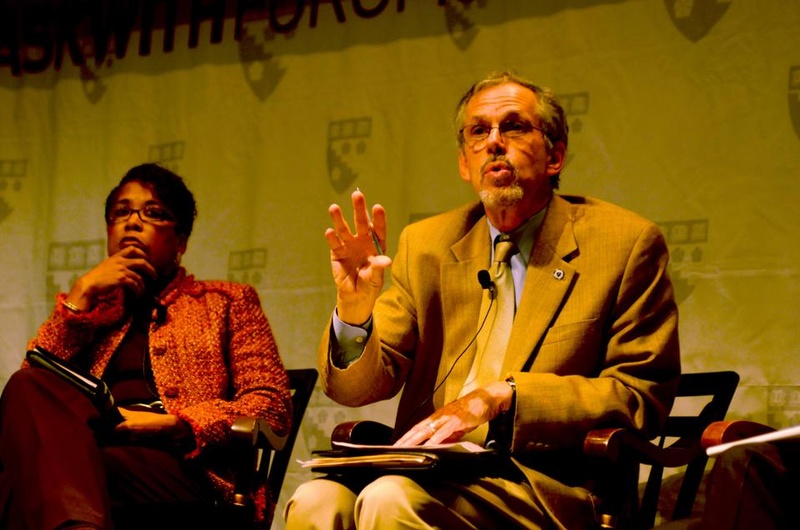 Massachusetts Secretary of Education Paul Reville (right) speaks about the documentary “Waiting for ‘Superman’” and its focus on charter schools as a solution to many of the flaws in the American education system.

Education experts questioned the efficacy of charter schools last night at a panel discussion on “Waiting for ‘Superman,’” a new and controversial documentary about the American education system.

The event, whose audience filled Askwith Hall, was held two weeks after the Harvard Graduate School of Education hosted an advanced screening of the film.

The five panelists—all Ed School faculty members—questioned the film’s heavy focus on American charter schools as a solution to problems in the education system.

“For me, the disappointment in the charter movement is that individuals are given a blank canvas to paint a school, and essentially they’ve painted the same schools we already have,” said Katherine K. Merseth, a senior lecturer at the Ed School. “I see a missed opportunity.”

According to Merseth, only 17 percent of charters actually perform better than public schools, whereas 46 percent do just as well, and 37 percent do worse.

Merseth added that some of the “finest charters” are using educational methods and strategies that can be applied to all types of schools.

Ed School Assistant Professor Martin R. West IV said he felt the director of the film chose to focus on this particular type of school system for dramatic effect.

“He’s a filmmaker,” said West of the documentary’s director, Davis Guggenheim. “He needed a climax in the film, and what better climax than the public lottery [to get into charter schools]?”

In addition, the film lacked an explanation as to why charter schools seemed to be the only answer, the panelists said.

“Waiting for ‘Superman’” follows the stories of five children trying to enter charter schools across the United States.

The advance screening on Oct. 1 featured a video message addressed directly to the Ed School audience from Guggenheim, who also directed the climate change documentary “An Inconvenient Truth.”

The screening and panel discussions were part of the Ed School’s Askwith Forums, a series of public lectures that encourage conversations about education.

“It shouldn’t take a movie for us to raise awareness that education is important,” Mapp said.

—Staff writer Xi Yu can be reached at xyu@college.harvard.edu.