Another Tough Weekend, but Crimson Gets First Win

Harvard beats GW, then drops three in a row at Princeton Invitational 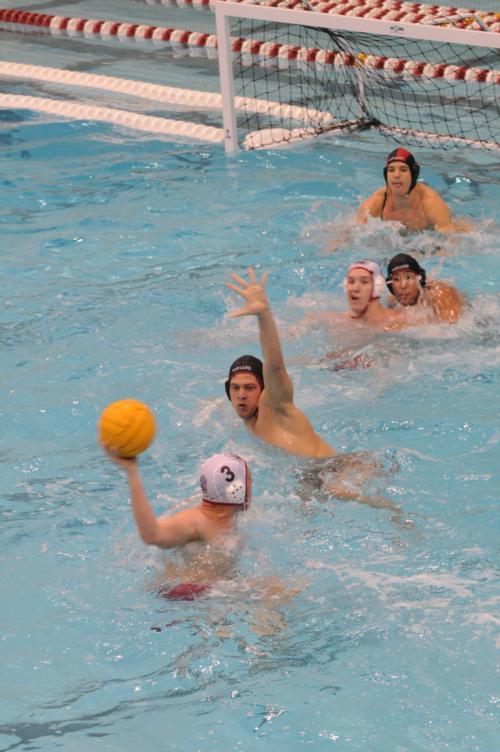 Harvard men’s water polo notched a decisive first win, but the squad has work to do before league play begins.

The Crimson (1-6) traveled to Princeton, N.J. for four contests in the Princeton Invitational, where it took its first contest against George Washington, 14-6, before dropping three straight to No. 11 Princeton, No. 16 Santa Clara, and Fordham. While Harvard did not always play up to expectations, junior co-captain Bret Voith addressed the importance of the team’s first win.

“I would not say I’m satisfied, because we could have played better,” he said. “But it was great to get that first win in our first game [at the tournament].”

The Crimson struggled in particular on the defensive side, yielding 52 goals over the weekend as it faced a number of talented opponents.

“We have to work on our transition defense,” Voith explained. “We need to focus on getting pressure on the other team.”

Despite Harvard’s struggles on the scoreboard, the team has confidence that it is moving in the right direction after showing more offensive versatility in its second week of competition.

“We had a big, marked improvement from the prior weekend,” co-captain Egen Atkinson said.

The Crimson’s quest for vengeance against its Northern Division foe came up a bit short on Sunday afternoon.

Voith completed a four-goal day with two scores and rookie Max Eliot also notched a pair, but Harvard could only muster a 1-7 in man-up situations, letting a number of key opportunities slip through its fingers.

The Crimson received additional offensive support from juniors Jeff Lee and Alex Thompson and sophomore Luka Babic, as well as a strong showing in goal from junior Alexander Popp. Popp made 11 saves in his second start of the tournament.

But Harvard was stung by a commanding performance from the Rams’ Ali Arat, who proved to be a single-handed force with seven scores.

“I think we failed to adjust to [Fordham’s] style of offense,” Atkinson said. “They have one very dominant player and we didn’t do a good job of neutralizing him.”

The Broncos came out strong and refused to let up on Sunday morning. The Crimson held Santa Clara to a 4-2 lead after the first quarter, but would never pull closer, as the Broncos demonstrated why they are ranked among the nation’s top 20 teams.

“Against Santa Clara we were playing a very good team,” Atkinson said. “The team fought hard, but it wasn’t close.”

Voith found the back of the net twice and Atkinson, Lee, Eliot, and sophomore Kevin DiSilvestro comprised the rest of the offense. Senior Nikhil Balaraman got his second start of the weekend for Harvard, but could do little to stop the Bronco onslaught.

Balaraman was solid in his first contest of the weekend, posting 13 saves in Saturday’s nightcap, but the Crimson faltered against a strong Tigers squad. Princeton, which dropped its first game of the season to No. 4 UCLA earlier in the day, took advantage of Harvard’s struggling transition defense for a number of scores.

On the offensive side for the Crimson, Atkinson led the way with a hat trick, capping a four-goal performance for the day. Voith and Thompson each added a pair of goals, while sophomore Mike Katzer completed Harvard’s best scoring day, notching a goal for five overall.

The Crimson opened the tournament with its first victory of the season against its Southern Division rival.

Since the Colonials defeated Harvard at the Eastern Championships two years ago, the squad had anticipated its chance for retribution—and capitalized on Saturday morning.

After only eight minutes, the Crimson forged a 4-2 lead that it would never relinquish, relying on strong play from Popp in net.

The sophomore logged eight saves and enjoyed for than enough offense from an energized Harvard squad.

“The reason the [GW] game went well is that we were playing very team-oriented offense and defense,” Atkinson said. “Harvard water polo doesn’t live or die by one player…and playing as a team certainly helped.”

Atkinson and his co-captain did not overlook a tremendous performance from Katzer, though, who paced the Crimson with a season-high four goals.

“We had a couple of big performances,” Voith said. “Katzer gave our offense some firepower.”

With two goals from Lee and Thompson and scores from four others, Harvard earned a crucial first win in 2009.

—Staff writer Max N. Brondfield can be reached at mbrondf@fas.harvard.edu.