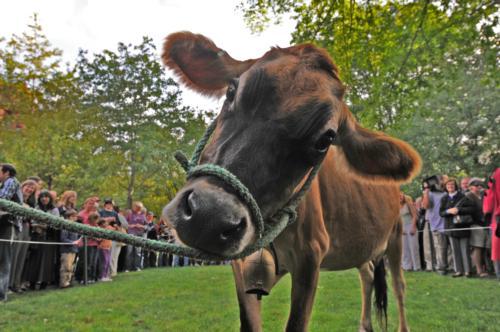 Yesterday, Tercentenary Theater welcomed a visitor it had not seen in over 200 years—a cow. The bovine guest was the charge of Harvey G. Cox Jr., Hollis Research Professor of Divinity, who brought her as part of an afternoon-long celebration of his retirement. In doing so, he revived a practice not observed since Edward Wigglesworth—the first to hold the Hollis professorship in 1722—and his son, who succeeded him, first brought their livestock out to graze. Cox retired this past June after 44 years at the Harvard Divinity School, where his position was the oldest endowed chair in the country, and where he established a reputation as one of the foremost theologians of his time. His first major book, “The Secular City,” sold over a million copies, and his undergraduate course, “Jesus and the Moral Life,” regularly attracted an average enrollment of 800 students in a year, according to Donald R. Cutler, Cox’s agent. “He is a big deal,” Cutler said. “He has always been an enormously inventive and perceptive teacher,” said Diana L. Eck, professor of Comparative Religion and Studies, a speaker at the celebration. “But he has never abandoned...his spirit of festivity.” Legend has it that the Hollis Professor of Divinity holds the privileged right to graze his cows—a perk that first came to Cox’s attention when he assumed the post in 2002, and later became the inspiration for yesterday’s ceremony. “Harvey spoke to [Plummer Professor of Christian Morals Peter J.] Gomes about the Hollis professor’s grazing rights,” said Cutler. “We said, let’s do it.” As the cow grazed in a patch of grass by Memorial Church, Gomes spoke jokingly about his colleague, once an advisor. “Only my colleague could conceive of such an occasion.” Gomes was followed by Travis Stevens, a divinity student, who gave a Latin oration in honor of the cow. When Cox reached the pedestal, he, too, focused on the bovine visitor. “She’s the real celebrity here today.” A band of tubas—dubbed “Udderly Tuba” for the occasion—played The Beatles’ “When I’m 64” and the children’s song “Old McDonald” while leading Cox, the cow, and followers to the Divinity School, where Eck and William Martin, a Rice University religion professor, both gave speeches. The evening milking followed. The celebration, said Eck, was “in keeping with the inventive and delightful way with which Harvey Cox has looked at the religious phenomena of the world and thought about the ways in which we human beings live and experience them.” “It is part of who Harvey is,” she said. —Staff Writer Madeleine M. Schwartz can be reached at mschwart@fas.harvard.edu. 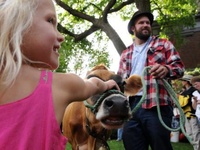 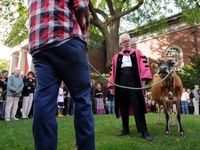 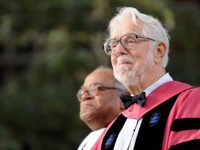 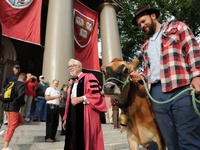 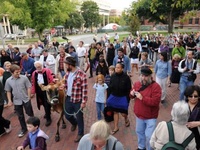