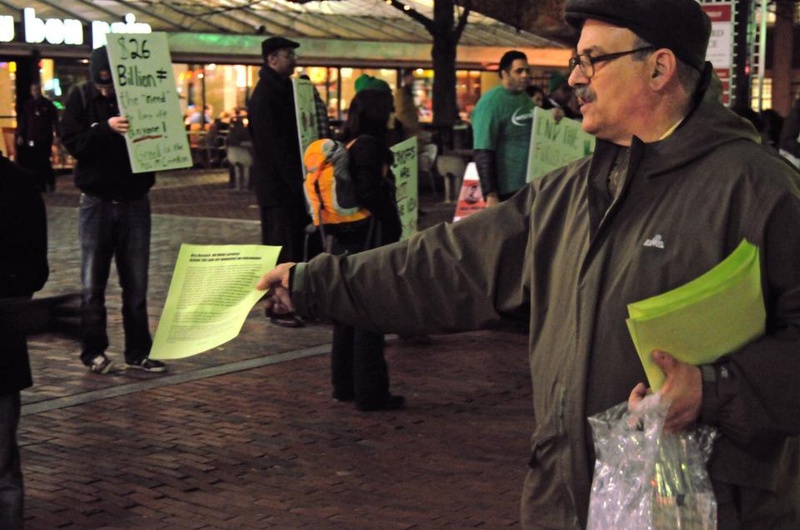 Several dozen Harvard employees and students rallied outside the Holyoke Center last night, protesting the budget cuts that may dim the holiday season for some University staff.

Members of the local branch of the Service Employees International Union, which represents security guards and janitors, joined other unions representing technical and clerical workers and dining hall staff, waving picket signs and chanting as University administrators streamed out of the Holyoke Center at the end of the workday.

Union officers addressed passers-by on a portable P.A. system, trying to encourage them to participate in the rally as they walked past.

Emeka Onyeagoro, a library employee running for Widener union representative of the Harvard Union of Clerical and Technical Workers, said that University staff were most concerned by the prospect of additional furloughs, which require them to take an unpaid period of leave while still paying out of pocket toward their benefit packages.

Other workers protested the replacement of full-time staff with part-time student workers. Desiree A. Goodwin, a library assistant at the Graduate School of Design, said that this meant students would be deprived of a dedicated library staff, and laid-off workers would lose their primary source of income.

According to Onyeagoro, fewer than half of the 119 workers in HUCTW who were laid off earlier this year have found employment elsewhere at Harvard, even though they had been promised priority consideration for other positions.

Harvard announced in June that it would lay off a total of 275 employees from across the University, in an effort to cut labor expenses after a precipitous decline in the value of the endowment.

Members of the Student Labor Action Movement carried a sign that read “The Harvard Corporation Stole Christmas,” and one pedestrian who noticed the student criticized the University for what he considered “unconscionable” actions.

“Harvard should be setting an example, according to principle,” said Mike McGann, an Ohio resident visiting Cambridge who observed the rally for a few minutes.

Several students passing by expressed sympathy for the University employees, but they questioned the effectiveness of the protests.

“The spirit is more impressive than the substance,” said Patrick W. Spence ’12. “These things tend to be a little peevish and ineffective.”