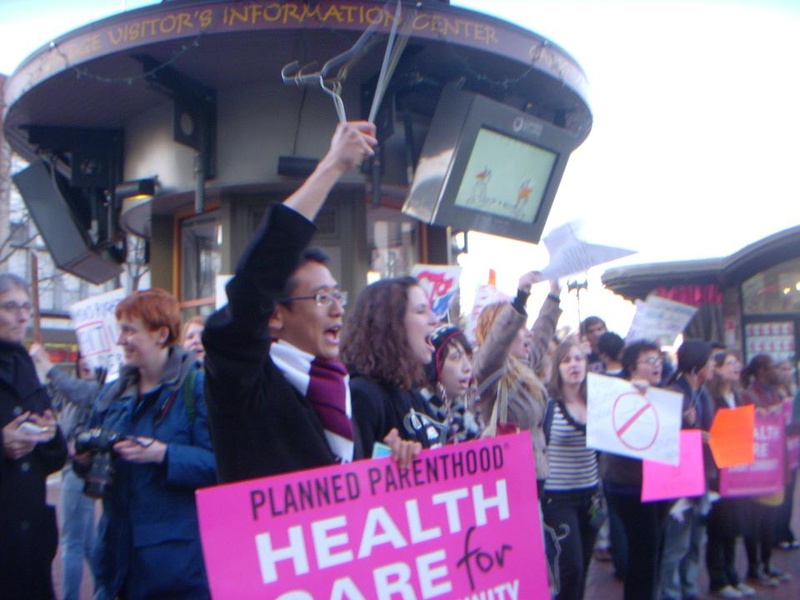 Dozens of students rallied yesterday in front of the Harvard T station to protest the Stupak amendment, which would prohibit coverage of abortions by publicly funded health-insurance plans.

Students from the College, Kennedy School, and Law School held signs, chanted, and brandished coat hangers to warn of dangerous alternatives that women might be forced to pursue under the law, which the House passed on Nov. 7. The Senate is still considering its version of health-care reform.

The group, Students Stop Stupak, hopes to attract the attention of senators through the media.

“We’re young people. We’re going to be their constituents for a long time,” said Leah Reis-Dennis ’13, political chair of Harvard Students for Choice. “Basically, we’re going to force them to listen to us.”

Signs at the rally displayed slogans such as “Abortion is not a class-based right” and “Call your senator to oppose Stupak.” The protesters also handed out flyers that read, “Legal restrictions do not stop abortions from happening, they just make abortions dangerous.” 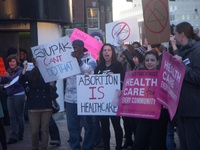 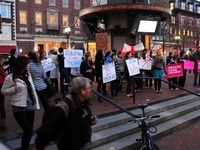 The group emerged from a meeting last Friday among members of Students for Choice and two IOP fellows, Kim Gandy and Gina Glantz, who are leaders in the abortion-rights movement.

Before the meeting was over, the attendees had formed Students Stop Stupak and created a Google group. Over the weekend, they set up studentsstopstupak.org and launched a Twitter account. Yesterday was their first rally.

“It’s pretty amazing that [Leah] was able to go from angry about an issue to taking action about an issue in about one week’s time,” said Peter J. Witzler, a Kennedy School student. “She convened a meeting and it spread like wildfire from there.”

The protesters were pleased with the rally’s effect on bystanders, some of whom joined in the chants and took turns holding the posters.

“The response from passers-by has been tremendous,” said Gandy, who was president of the National Organization of Women from 2001 until this year. “We ran out of flyers in 20 minutes.”

“It’s fantastic,” Gandy added. “Anybody who was wondering if students still go from angry about an issue to taking action, this should put an end to their speculation.”

“Watch out, America’s politicians,” she wrote, “students are back on the streets.”