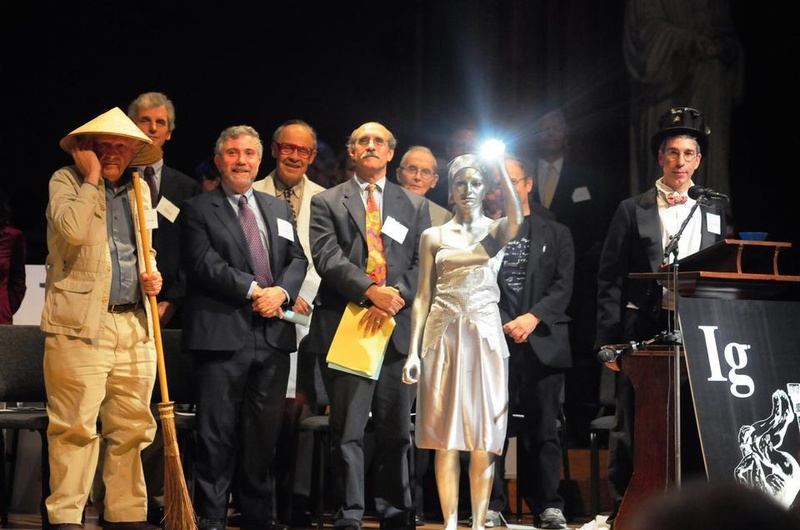 Wearing nothing but a silver speedo, sneakers, and paint, a man darted around the atrium of Sanders Theatre last night—sticking out, to say the least, as students, Nobel laureates, and followers of the Annals of Improbable Research filed in to attend the “19th First Annual Ig Nobel Prize Ceremony” last night.

On stage, a poker table, a grand piano, a bar outfitted with shaker and glass, and people dressed in vibrant top hats, tails and Gatsbyesque dresses greeted attendees of the Ig Nobels, which honor people for findings that first make people “LAUGH, and then make them THINK.”

The night began with the Boston Squeezebox Ensemble—a set of accordion players in lab coats—processing into the theater following a 15-minute delay due to technical difficulties.

Once inside, the speedo-wearer’s eccentric, silver-bedecked appearance began to make sense: he served as one of three human spotlights that stood on stage and pointed out distinguished scholars as they were introduced throughout the ceremony.

This year’s winners of Ig Nobel awards—centered on the theme of risk—affected a wide range of people, from farmers to bar-brawlers to bankers to expectant mothers. And it was clear from the continuous laughter of the audience and the dozen or so Nobel Laureates onstage that the year’s selection catered to the dual mission of humor and thought.

The 2009 Ig Nobel Peace Prize was awarded for research from the University of Bern, Switzerland. Stephan Bolliger and Steffen Ross sought to determine whether a full or empty beer bottle did more damage when smashed over someone’s head (it was the latter). Bolliger accepted the award with a smile and proceeded to smash a prop bottle over his own head.

Earlier in the ceremony, Anthropology Professor Daniel E. Lieberman ’86—with his back arched, abdomen pushed out, and hands resting on his flat belly—described the research, in words and action, that led to his honor.

Lieberman and his colleagues analytically determined why pregnant women do not tip over, despite the balance problems that humans must overcome as bi-peds.

They determined that the third lumbar vertebra that women have (but men do not) allows them to bend from the lower back in order to stay balanced with a swelling belly and higher center of gravity.

“[I had] never thought of this research as significantly funny, but apparently someone did,” Lieberman said. The crowd chuckled as he walked to receive his award with a his oxford shirt stuffed to look like a pregnant belly.

Other award-winning projects showed that cows give more milk if named, created diamonds from tequila, and transformed a brassier into a gas mask for two.

The Economics prize was awarded to officials of four Icelandic banks. None of the award recipients came to receive the award—one of multiple jokes coming at the expense of the banking industry.

This year’s opera, a tradition of the ceremony—performed between speakers, awards, and interludes of scientific experimentation—satirized the financial crisis and made clear that the year’s theme of risk did not only apply to academic experimentation.