Big Crowds Expected For Head of the Charles 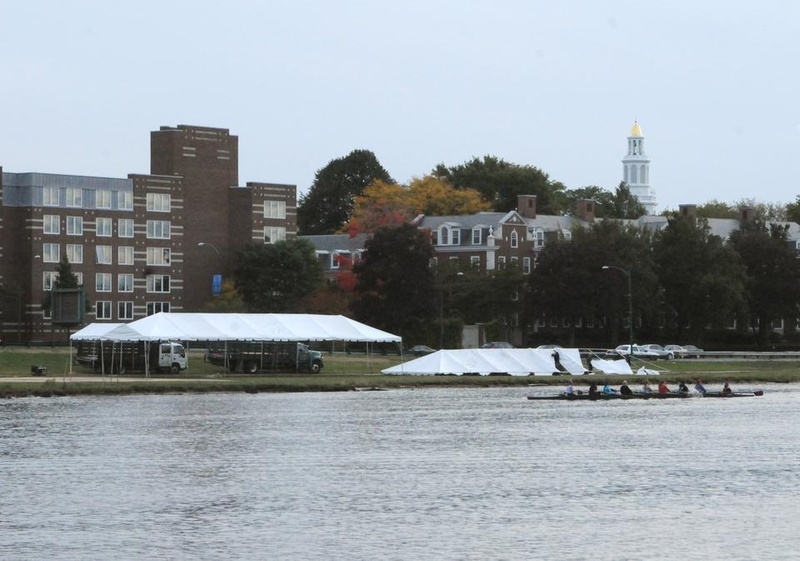 Preparations for the 45th annual Head of the Charles Regatta begin, as crew teams warm up on the river and workers raise a tent for spectators. This year's race will feature 'Reunion Villages' for participating schools' alumni.

This weekend will see hundreds of thousands of spectators flock to the banks of the River Charles for the annual Head of The Charles weekend.

This weekend marks the 45th annual Head of the Charles Regatta, an event which saw more than 300,000 spectators come to watch 8,200 rowers compete last year.

Harvard crew teams treat this event as a “fun” chance to participate in a race that involves all levels of participants.

“We want everyone to be able to participate and don’t necessarily try to select the best possible crew” said Harry Parker, the men’s head coach.

“More often than not rowers will be able to row with their classmates.”

But for the less athletically inclined Harvard student, there will still be many opportunities to share in the festivities this weekend.

Numerous food and beverage vendors will line the banks of the river, and this will mark the first year of the Eliot Bridge Enclosure—a hospitality tent that will set back participants $60 each day to enjoy food and other amenities.

Other attractions will include the Rowing and Fitness Expo tent which will have new exercise clothing, and the Weld Exhibition where official sponsors of the Head Of The Charles will offer free samples of their products.

Various university and preparatory school alumni associations will be renting out tents in a spectator area named the “Reunion Village.”

Thomas C. Foley Jr. ’13, an alumnus of Phillips Academy Andover, is planning to visit the Village.

“It is a great way to get back together with the kids who are still rowing at Andover,” he said.

The weekend holds a large economic and cultural significance for the city of Cambridge as an event that attracts people from around the world.

“For the city itself it is a great tourism boost and the hospitality sector really starts to benefit,” said Jim Connelly, the press officer for the regatta.

“The event will give people the opportunity to learn what is going on in Cambridge and Boston” said Jason M. Weeks, executive director for the Cambridge Arts Council.

“[The regatta] has become a very beloved event and people have come to plan their fall around the Head Of The Charles.”