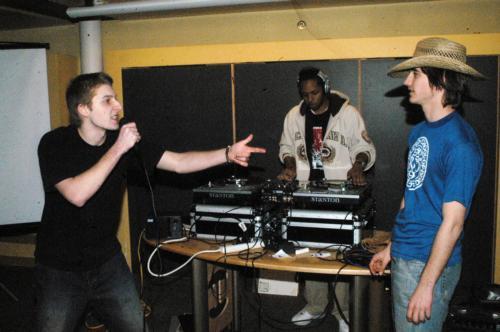 Six amateur rappers filled Ticknor Lounge with insults and epithets on Saturday as they faced off in Outwit, a freestyle rap competition.

The event pitted the rappers against one another in three-minute matchups during which the competitors rapped over a beat played by Darius P. Felton ’08, a.k.a. DJ Radius.

The competition was sponsored by Tuesday Magazine and The Darker Side, a weekend music program on WHRB, Harvard’s student-run radio station.

“This is ‘Bennie Els,’ I play on the lyrical chords / Look at this guy, he should be on the basketball courts,” rapped Northeastern sophomore Ben D. Lombardo in the final round of competition.

The response from Darryl W. Finkton ’10, a guard on the men’s varsity basketball team, was equally straightforward.

“Don’t come at me with that, you talkin’ about crack / I got my shit from education, what you know about that?” he fired back.

The winner of each round was chosen by a panel of three judges, including Briggs-Copeland Lecturer on English and American Literature and Language Peter Richards and The Darker Side member and Crimson magazine editor Alwa A. Cooper ’08.

The audience members were asked to cheer for their favorite performers at the end of each round, but the judges made the final decision on which contestant to send to the next level of competition.

Felton, however, said he felt the judging might have been overly influenced by the reaction of the audience.

“I guess the judging was a little unorthodox,” he said. “Sometimes someone would get in one good line and the audience would be like, ‘yeah,’ but he actually was not better. But that’s alright, it happens.”

One competitor, Finkton, said he had not planned to enter the competition until he was enthusiastically volunteered by two prefrosh he was hosting, and reluctantly agreed to leave the audience and participate.

“They were just messing around,” Finkton said of his prefrosh. “They thought it’d be funny to try and get me to do something like that.”

Finkton had reason to thank his prefrosh by the end of the night. After three rounds of competition, he was crowned freestyle champion.

Faust was 'the candidate to beat,' Rudenstine says