Quadlings Clamor for ‘Place Where We Can Be Loud’

At Currier forum, students say top floor of Hilles should be common space 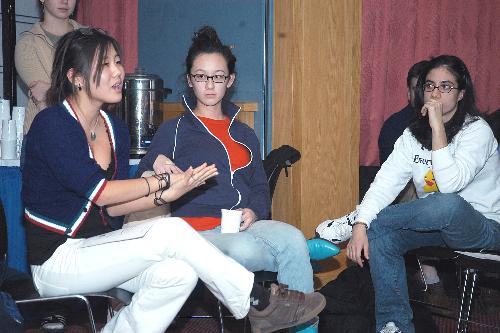 At an open meeting in Currier House hosted by Assistant Dean of the College Paul J. McLoughlin II last night, the consensus among students was that the fourth floor of Hilles, currently being considered for renovation, should be left as open-usage common areas for student groups and mingling.

The meeting, which attracted more than 30 students at its peak—all quad residents—was a forum for discussing proposed layouts for the fourth floor.

McLoughlin, who handed out proposed floor plans, said that the meeting was “maybe one of the last times we can ask students before the architects finalize their plans in six to eight weeks.” Construction starts in the spring for occupancy in the fall, he added.

The floor plan included a large multi-purpose room, the coffee bar that currently exists on the fourth floor, several music practice rooms and many rooms for student organizations.

Almost all students present at the meeting seemed to think that the fourth floor needed to be opened up as a social space rather than split up into a number of conference rooms.

“The more walls you can tear down, the more people will appreciate it,” said Andrew C. Stillman ’06. That way students will “step out of the elevator and see people having coffee, having fun. The more walls you tear down the more successful it will be.”

Other students said common space should be separate from the student spaces.

“It’s important to have a place where we can be loud and...we’re not self-conscious about it. I just want this to be a place where noise is acceptable and also the norm,” said Irene S. Choi ’07.

Currier House Committee Chair Jonathan C. Bardin ’06 said that his ideal use of the space would be for the “whole floor to be a student zone, where people can laugh as loud as they want with their friends.” He also said that it was important to make the area physically attractive.

“Once you start to think of it as a more open student space, aesthetic starts to become really important,” said Bardin, who is also a Crimson editor. “Loker proves that providing amenities isn’t enough. You have to keep students involved in the visuals.”

Mahmoud Tarif ’06-’07 said that one way to make the space less “sterile” would be to model the décor after “a café or a coffee shop, not a student space.” Choi suggested student art, photos, and paintings on the walls.

Another idea floated at the meeting was the creation of a performance area around the coffee bar. Choi said this space would provide an alternative social hub to Loker, which is “all student groups on weekdays.” She added that “there’s nowhere to go past midnight on weekends in the Square.”

Many students suggested a closing time as late as 4 a.m. and that a wide selection of food be available at the coffee bar.

The student reaction to the meeting seemed positive.

“There was actual conversation going on with [McLoughlin] asking us what we have in mind,” Tarif said.

He also said that students had similar ideas about the use of the space and “each of us is adding to the other.”

Tarif said he believes the social space will increase the sense of community in the Quad.

McLoughlin said that students’ suggestions would be incorporated into the renovation.

“We’re not so far in the process that we can’t take good ideas and implement them,” he said.