Co-captains Hana Peljto, the Ivy Player of the Year, and Tricia Tubridy combine with center Reka Cserny to make up the Ivy’s best front line 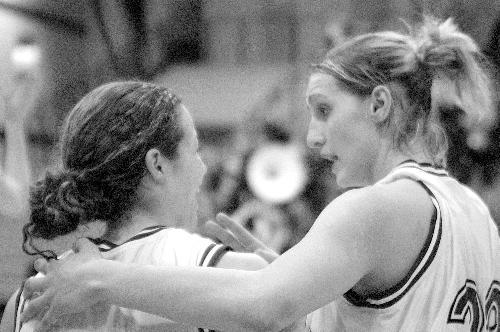 The Harvard women’s front court is to Ivy basketball what the Lakers’ trio of Kareem Abdul-Jabar, James Worthy and Magic Johnson were to the NBA in the 80s.

The Crimson trio of junior Reka Cserny and co-captains Hana Peljto and Tricia Tubridy are seeking their third straight Ivy championship. They form a Harvard front court that is already being advertised as among the best the league has ever seen.

“I think that’s a pretty accurate statement, only because Hana has been the MVP of the league for two years and will be an incredible strong candidate this year,” said Crimson coach Kathy Delaney-Smith.

The trio has built a reputation in the Ivy League over the last three years despite lacking the size to push opponents around the court. 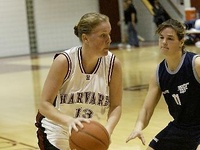 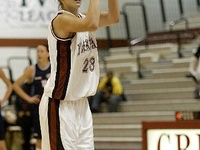 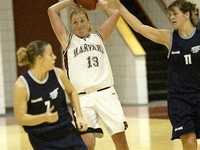 Their combination of speed, shooting ability and experience creates the potential for another undefeated season amongst the Ancient Eight and the possibility of earning the Crimson its third straight berth in the NCAA Tournament.

For three years now Peljto, an annual Ally-Ivy selection, has been the anchor of the powerful front court standing at 6’2.

After being named Rookie of the Year in 2000, Peljto followed up with consecutive Ivy scoring titles and unanimous Player of the Year honors.

Last year she had her way against the Crimson’s opponents, averaging 21.3 points per game and leading the conference in rebounding with just under 10 per game.

After drawing numerous double- and triple-teams last year, Peljto worked with her coaches to locate open players on the floor, hoping to help both herself and her teammates score. By honing her passing skills during the team trip to France this summer, Peljto has added yet another dimension to her game.

“We’ve been trying to encourage her to pass up the first and second opportunity and get the ball back a third and fourth time, which we think will get her easier, better shots,” Delaney-Smith said. “She did that really well in Europe and hopefully that will continue this year.”

For Peljto, part of the motivation to work on the aspects of her game outside of shooting and rebounding comes from the bitter taste of losing to Kansas State in the NCAA Tournament last year.

As a senior co-captain, Peljto understands the pressure to return to the playoffs and advance beyond the first round this year.

“We have even higher expectations than we did last year, and especially for the seniors, we feel a sense of urgency to finish out on a strong note and finally getting that NCAA win,” Peljto said.