Assistant on the Far Side of the World 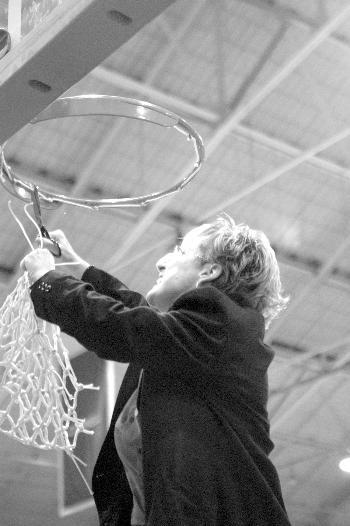 Harvard women’s basketball coach Kathy Delaney-Smith found herself in a whole new world last summer, even if she didn’t get a magic carpet ride there.

But the change in scenery wasn’t the only thing new for Delaney-Smith, who was serving as an assistant coach for the first time in her career. Playing back-up to USA head coach Jim Foster was a shock in itself.

“I had a lot of trouble,” Delaney-Smith said. “I’ve never been an assistant my entire life, not at the high school level or any level, so it was quite funny.”

Delaney-Smith and Foster, who coaches at Ohio State, have a long friendship, sharing their experiences as coaches with each other. Each compliments the other’s professional abilities, with Foster adding that Delaney-Smith is “a terrific communicator” and “ego-less” before poking fun at her adjustment to being an assistant.

“She did a great job,” Foster said. “I’m sure she had a very sore tongue at the end of the month for the amount of times she had to bite it.”

Felisha Legette-Jack of Hofstra University was the other assistant to Foster.

Delaney-Smith had some time to become acclimated to her new role, since the USA team hosted a round of “friendlies” in Boston in July before heading to Croatia. Her husband and family members got in a few chuckles when she failed to fulfill her assistant coach’s duties early on.

“My job was to carry the clipboard,” Delaney-Smith laughed, “and they just hysterically laughed at me because I can’t remember the clipboard. I’d much rather talk to the team.”

Talking on the court was one of the things Delaney-Smith stressed when coaching. Communication was especially important because the team was composed of 12 women from 11 different colleges. Selections were based on trials held in May for the top players 21 years old and younger.

Delaney-Smith mainly worked with the guards, including Minnesota’s Lindsay Whalen and Rutgers’ Cappie Pondexter, two players she might face in the NCAA Tournament next spring.

But a more obvious possible tension stemmed from two other players: forward Kendra Wecker and center Nicole Ohlde of Kansas State. The Wildcats knocked the Crimson out of the NCAAs in the first round last year.

“Did I hurt them?” Delaney-Smith joked. “I wanted to hate them…no, Kendra Wecker and Nicole Ohlde—definitely two of the best players in the country, and they just don’t come any nicer.

The players likewise quickly adjusted to having Delaney-Smith as their coach rather than their opponent’s.